Another example of the Swiss giant’s technological prowess, Rolex DayDate watches quickly rose to fame thanks to their connection with the most powerful people in the world. Only available in 18 karat gold or platinum, the timepieces are among the ultimate examples of luxury. With a broad choice in dial and bezel designs, this collection can appeal to any tastes. 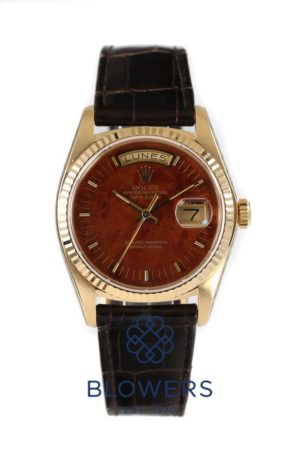 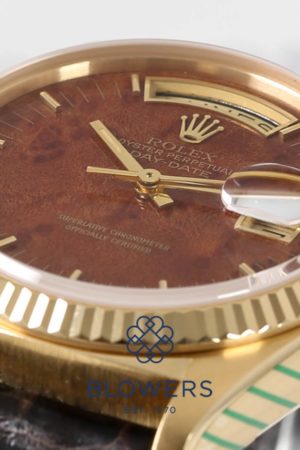 The History of Rolex DayDate Watches

Only 11 years after the DateJust was released, the Rolex debuted a new model that was a step above from its date-only offering. Although it possessed the same fluted bezel and case size as its sibling, it featured a never-before-seen bracelet and an altogether more important development – the full day displayed at 12 o’clock. The days are available in a number of different languages, practically guaranteeing them universal appeal. Then, just as now, the Rolex DayDate watches were only available in 18 karat gold or platinum, with the References 6510 and 6511.

The next iterations of Rolex DayDate watches appeared in the early 1960s, known as the 18XX series. These new timepieces introduced more dial options and introduced various bezel and bracelet textures, most notable of these being the President bracelet and bark bezel. Towards the end of their run, the 18XX series Rolex upgraded the movement to introduce a “hacking seconds” function.

In 1977, the Swiss watchmaker unveiled some important additions to the DayDate family. Firstly, the 180XX series (also known as the Five-Digit DayDate) featured the “quick-set” movement that allowed the date to be set independently of the hour hand. That same year, Rolex launched their most memorable quartz offerings, the Oysterquartz DayDate and Oysterquartz DateJust. A mixture of classic model designs and the Rolex Reference 5100, the watches boasted a bracelet that looked as though it took more inspiration from the Audemars Piguet Royal Oak than the traditional DayDates or DateJusts. These models were discontinued after 25 years and have slowly been going up in value ever since.

Rolex DayDate watches are more commonly known as the President watch, yet there is some level of ambiguity as to where this title actually came from. One possible theory comes from Lyndon Johnson, who wore a version of the timepiece with a President bracelet. An advert from 1966 shows the watch on Johnson’s wrist, with the slogan “the Presidents’ Watch”.

Another legend surrounding Rolex DayDate watches is that the President moniker came as a result of the watch that was said to have been gifted to President John F Kennedy by Marilyn Monroe, right after she famously sang ‘happy birthday’ to him in Madison Square Garden. This particular model was sold at auction in 2005 for $120,000, however there was no official documentation to prove the presidential connection.

It is also possible that the ‘President’ nickname is a mistake. Some people say that the moniker actually refers to the bracelet instead of the watch itself. An advert from 1966 refers to the name “president”, but only when talking about the bracelet and not the timepiece as a whole.

Since Rolex DayDate watches are only available in 18 karat gold or platinum, they are not only an extremely valuable item of jewellery, but also an extremely secure investment of capital. Due to the high-quality workmanship and the stable brand equity the Swiss manufacturer enjoys, the timepieces are considered to be a reliable investment by both watch connoisseurs and collectors alike.

It is possible to find examples of extremely good price offers on the second-hand and vintage watch markets, with newer models or those featured gemstones commanding strong valuations. All in all, this exclusive range provides perfect timekeeping, backed by a timeless style and exquisite designs. This makes them an excellent addition to anybody’s collection.