The perfect blend of sporty and functional, Tudor Fastrider watches are ideal for those who like timepieces with attitude. Extremely versatile in terms of colour and design, this iconic range continues the special relationship between the Tudor brand and the sporting community, and would take pride of place in anybody’s collection. 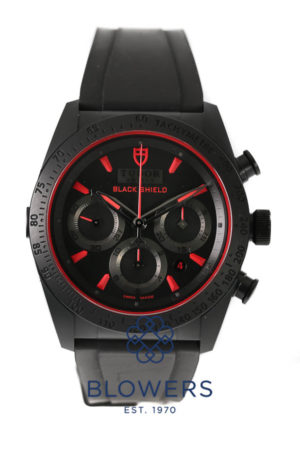 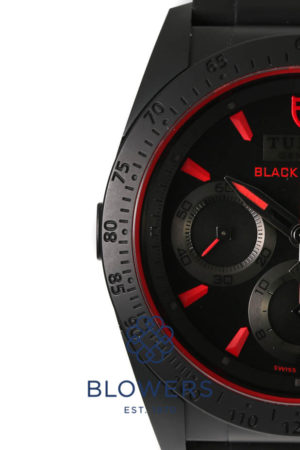 The History of Tudor Fastrider Watches

The first Tudor Fastrider watch was launched onto the market in 2011, the result of a collaboration between the watchmaker and luxury motorcycle manufacturer Ducati. The two initial models showcased Ducati’s signature black and red colours, and featured a 42mm case and a powerful chronograph with a 46-hour power reserve. They also came with a quickset date function on the 9 o’clock position. These early models were special editions and produced in very limited quantities, making them instant collectors items. A standard version of the timepieces was also released, with the red dial being replaced by either black or silver.

Four years after their debut, the watchmaker released updated Tudor Fastrider watches. The most notable difference of these models was the introduction of new dial colours, such as green and yellow. In addition, the dial and bezel have a matte finish similar to that of the Pelagos collection. Other design touches included the iconic “panda style” subdials.

Later in 2015, Tudor launched another edition to the Fastrider lineup, the Black Shield. This proved to be the most striking upgrade of the collection to date, giving the timepieces a brand new look and feel that was achieved by using an injection molded Monobloc instead of ceramic coating. The result of this is a near scratch-resistant watch whose all-black aesthetic is perfectly contrasted by the white dial markers and hands. Ever since its release, the Tudor Fastrider Black Shield has become a real staple of the collection.

Over the years, Tudor has released several versions of the Black Shield, with some featuring red accents instead of white. There is also a slightly softer and less sporty variation that boasts brown dial accents and a brown strap. Later models have become equipped with Tudor’s modified ETA 7753 self-winding mechanical chronograph movement.

A Collaboration Between Legends

Much like its older brother brand, Rolex, Tudor places special emphasis on the sports watch category. This laser focus is not only the driving force behind their designs, but also greatly influences the partnerships the company makes. Tudor Fastrider watches are an iconic example of one such collaboration.

The Fastrider is the result of the watchmaker teaming up with the famous and luxurious Italian motorcycle manufacturer Ducati. These two iconic brands first started working together in 2011, with Tudor becoming the official timekeeper for the sporting company. This partnership grew and grew, resulting in the launch of this exquisite range of timepieces.

Embracing the Need for Speed

Sporting dynamic colours such as bright yellow, red or olive green, the original Tudor Fastrider watches are a real crowd pleaser. Designed to correspond with different models of the Ducati Scrambler, these timepieces are made from light, scratch-resistant ceramic. The star of the collection, the Fastrider Black Shield, is designed to represent the Ducati XDiavel and feels extra sporty thanks to the high-contrast splashes of colour on the dial.

With their functionality and sporty designs, these iconic timepieces are geared towards motorcyclists, sports watch enthusiasts and motorsport fans for life. If you are somebody who enjoys life in the fast lane, Tudor Fastrider watches are the perfect option for you.