View basket “Bentley GMT M47362” has been added to your basket.

What started life as a special project between watchmaker Breitling and car manufacturer Bentley, quickly turned into a full collection of high-class wristwatches. Combining the function, luxury and style of the two brands, Breitling Bentley watches are truly unique. Featuring a variety of complications such as chronographs, GMT time zones, and power reserve indicators, these iconic timepieces are designed to make a statement and deserve to be part of everybody’s collection. 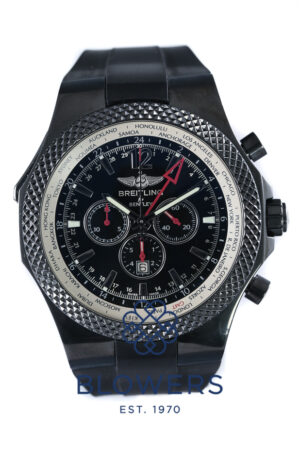 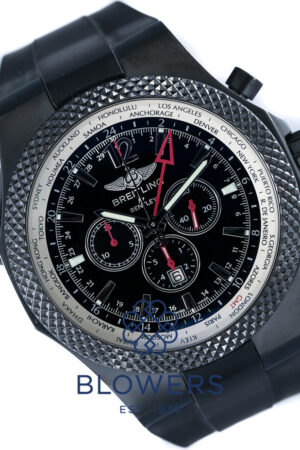 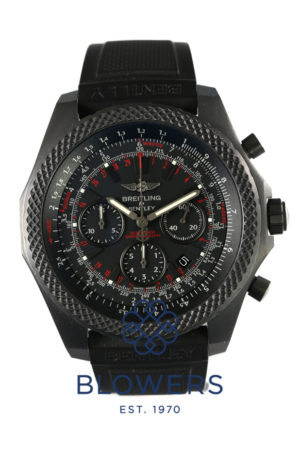 A collaboration of perfection and luxury, Breitling Bentley watches are the result of a long-standing relationship between two powerhouses of their respective fields. Each exquisite wristwatch combines the finest Swiss craftsmanship with refined British style.

The first watch created by the partnership was the Breitling Bentley Le Mans in 2003, which was launched to commemorate the car manufacturer’s win at the famous race. It featured a 24-hour indication in honour of the race’s duration, while its bezel was perlaged just like the dashboard of a Bentley racing car.

As you would expect, many of the timepieces in the collection draw inspiration from Bentley’s prestigious automobiles. This is particularly evident with the Breitling Bentley 6.75 A44362 chronograph, which takes its name from the 6.75-litre engine from Bentley’s Mulsanne range of limousines. The caseback is made to resemble a car’s wheel rims, while its bezel features the iconic honeycomb radiator grille motif. Another example is the Bentley GMT A47362, which is sized at 49mm. In addition to the GMT function, the timepiece boasts a date and chronograph function.

The Breitling Bentley Barnato is another interesting subset of the collection, whose history spans longer than the partnership itself. In the 1920s, there was a group of British motorists known as the ‘Bentley Boys”, who we will discuss more a bit later on. A key member of this group was Woolf Barnato, who went on to become the owner of Bentley. To honour the man, Breitling created the Breitling Bentley Barnato 42, which was available in both stainless steel or a black carbon coating. This second variation was given the moniker Bentley Barnato 42 Midnight Carbon.

Another fantastic example from the Breitling Bentley collection is the Flying B series, which is an elegant tribute to Bentley’s iconic ‘Winged B’ symbol. These models have a rectangular case instead of the regular circular shape, and shift the honeycomb motif to the dial rather than the bezel. They also feature an off-centred pair of overlapping circular areas for the main hours and minutes indicators, and a small seconds subdial.

The Bentley Continental GT is one of the world’s most luxurious coupés, so it’s no surprise it has a watch dedicated to it — the Bentley GT “Dark Sapphire” Edition. Its in-house calibre B06 has a 30-second chronograph and is incredibly hard to find, given the fact only 500 copies were made. Meanwhile, the Mulliner Tourbillon is one of the most expensive and elaborate of Breitling’s watches. Every single timepiece in this range is a reflection of its owner, given it can be customised to their own taste. Only a few of these amazing models were made every year.

To celebrate Bentley’s centenary, Breitling released the Premier Bentley Centenary Chronograph Limited Edition. It featured a lacquered elm burl dial with two black subdials and applied silver bar indices to mark the hours. Only 200 copies of this model were ever made. The Chronomat B01 42 Bentley followed in 2020, which featured a striking green sunburst dial and was paired with a Rouleaux bracelet. That same year, the Bentley Continental GT Mulliner Convertible was launched. This stainless steel timepiece had numerous colourful accents and a tachymeter scale. It was also water resistant to 100m.

In 2021, after 19 years together, one of the longest partnerships between a Swiss watchmaker and luxury car brand finally came to an end. April of that year saw the release of the Breitling Premier B21 Chronograph Tourbillon 42 Bentley Limited Edition, becoming the final collaboration timepiece between the two companies.

How an Iconic Partnership was Born

While Bentley is more commonly known for its luxurious road cars, it also has quite a fearsome reputation on the track. The brand famously won the 24 hours of Le Mans four times in a row from 1927 to 1930, firmly establishing itself as a serious contender in the world of motor racing. At the time, its racing output was spearheaded by a group of wealthy men known as the “Bentley Boys”. Their enthusiasm for motor racing and rising to a challenge was matched only by their female counterparts, the “Bentley Girls” — who excelled in races such as the Monte Carlo rally and Le Mans.

It was the spirit of celebrating mastery that caused Bentley to forge a relationship with watch manufacturer Breitling. More specifically, it started with an onboard clock. In 2002, the carmaker was looking for horological advice for its new Continental GT, the first time it had looked beyond its own craftsmen. Breitling was an obvious choice, since it had been producing onboard chronographs for both aviation and motoring since 1931. The result of Breitling’s handiwork was so well-received that it was used as inspiration for an extended line of timepieces.

A Marriage of Craftsmanship and Style

Breitling Bentley watches effortlessly represent the concepts of style and functionality. They combine luxury and precision with elegance and top performance. The Breitling for Bentley line is unmistakably “Swiss Made”, while at the same time demonstrating refined British style. Most models will feature a distinctive bezel with a relief pattern reminiscent of the carmaker’s characteristic grille.

The wristwatches in this unique collection have distinctive styles that are inspired by Bentley’s luxurious Bentley automobiles. They are designed for watch enthusiasts with style, high standards, and impeccable taste. Equipped with numerous features, the timepieces attract people who know what they want and will never compromise. Every single model represents performance and prestige, making them ideal for those who enjoy the finer things in life.