From the polo field to the wrists of the rich and famous, Jaeger-LeCoultre Reverso watches are charmingly sleek and boast an extremely unique functionality. These exquisite timepieces house a reversible case that can be flipped at will to reveal a second dial, and also protect the original art-deco dial. Since its release, the collection has become a classic timepiece from the Swiss manufacturer. Thanks to its one-of-a-kind aesthetic, it really gets the pulses running of every stylish watch connoisseur. 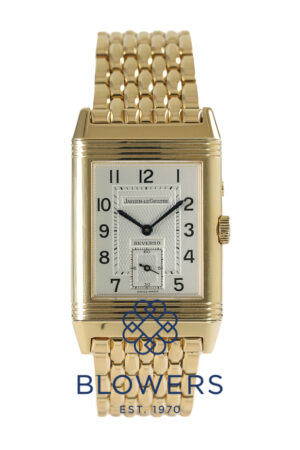 The History of Jaeger-LeCoultre Reverso Watches

Jaeger-LeCoultre Reverso watches have one of the most unique origin stories in the entire world of haute horlogerie. While travelling in India in the early 1930s, Swiss businessman and watch enthusiast César de Trey attended a polo match at a club of British army officers. Apparently the sport of polo was quite a dangerous pastime for wristwatches, which were regularly broken. While on the trip, de Trey was approached by a soldier who had just damaged his watch and challenged him to create a timepiece that could withstand the rigours of a match.

The idea was then discussed with Jacques-David LeCoultre, the then owner of the LeCoultre manufacturing firm, who was tasked with creating the mechanisms. LeCoultre then hired the company Jaeger S.A. to build the reversible case. In turn, Jaeger brought in French designer René-Alfred Chauvo who invented the unique slide and flip mechanism. The end result was a wristwatch that could flip, protecting it from shocks, while providing a case back that had plenty of room for personalisation.

Released in 1931, the original Reverso had a 38mm long and 24mm wide casing, making it the same size as today’s Reverso Classique. Its dial only featured hours and minutes hands, something that would remain the same until 1934 when newer models had a small seconds counter at 6 o’clock. Also introduced in 1932 was the concept of personalising the backs of the timepieces with engravings or enamel miniatures. In 1943, the watch was also advertised as the ‘ideal army watch’ thanks to its robust properties.

Despite the Reverso initially being popular, that started to wane towards the end of the Second World War. This, coupled with a glut of quartz watches in the late 1960s, meant that Jaeger-LeCoultre decided to put mechanical timepieces on the backburner for a while. That all changed in 1972 when Italian watch dealer Giorgio Corvo bought up around 200 empty Reverso cases, had movements installed, and sold them all in Italy. After selling his entire stock, Corvo convinced Jaeger-LeCoultre to only use mechanical movements in the models. Finally, in 1983, the Reverso collection was finally revived in a line of timepieces that mostly house quartz movements.

Some two years later, a complete overhaul of the model took place to enable the timepiece to become water-resistant. The casing went from being made of 30 parts to over 50, making it one of the most complicated in watchmaking history. Then, in 1991, the manufacturer began a period of creating limited edition Reverso models, starting with the Reverso 60ème. It featured an 18ct pink gold case, with a solid silver guilloché dial. Other 500-piece limited editions soon followed, such as the tourbillon in 1993, a minute repeater in 1994, a retrograde chronograph in 1996, one with a dual timezone in 1998, and a perpetual calendar in the year 2000. During this time, the manufacturer also introduced the Duoface concept, which featured a second dial on the back of the watch.

To mark its 70th anniversary in 2001, the Reverso gained an 8-day double barrel, which offered enhanced accuracy. Around 500 pieces were made, Thanks to its patented large date, this anniversary model paved the way for the Grande Reverso, which would inherit its chief characteristics. An example of this is the Reverso Grande GMT, which provided useful functions such as time zones, day/night indications, and instant power reserves.

The year 2006 marked the birth of the first wristwatch to have three dials that were controlled by a single movement, the Reverso Grande Complication à Triptyque. Not only did it display the standard time, but it also featured a sidereal time and perpetual calendar. Just two years later, the Reverso Gyrotourbillon 2 was launched, which was the first time a wristwatch ran on a cylindrical hairspring. It housed three major complications, a spherical tourbillon; a perpetual calendar with double retrograde indicators and solar time with the equation of time.

As a celebration of the Reverso’s 80th birthday, Jaeger-LeCoultre unveiled the Grande Reverso Ultra Thin, which included two Tribute models based on the 1931 original. That same year, the Reverso Repetition Minutes a Rideau was also launched. Then, in 2016, the 85th anniversary of the collection was marked with the Reverso Tribute Gyrotourbillon. Another important milestone was celebrated in 2018, this time being the 185th anniversary of the watch manufacturer itself. To commemorate the occasion, the Reverso Tribute Tourbillon Duoface was launched — which combined the Duoface concept with a flying tourbillon.

The year 2021 then brought the 90th anniversary of the Reverso, which was marked with the launch of the Reverso Hybris Mechanica Calibre 185 Quadriptyque — by far the most complicated member of the entire collection. Not only was it the world’s first wristwatch to have four different phases, it also housed 11 different complications, such as a perpetual calendar, minute repeater, and indications of the synodic, draconic and anomalistic cycles.

On the Wrists of the Famous

Elegant and timeless, yet incredibly practical, Jaeger-LeCoultre Reverso watches are beloved the world over. A differentiating feature of the timepiece is the ability to add a personalised engraving with jewel embellishments on its hidden caseback. This makes the Reverso an exquisite work of art, so it is no surprise it is incredibly popular amongst the rich and famous.

Stars such as Pierce Brosnan, Adrien Brody and Leonardo DiCaprio have all adorned their wrists with a Reverso. French actress Julie Gayet has been pictured wearing the Reverso Ultra Thin in gold, while the character of Don Draper in Mad Men relies on this special timepiece to complement his sleek 1960s style. The timepiece even graced the streets of Gotham, being worn by millionaire Bruce Wayne in The Dark Knight Rises. If you are a fan of high society, Jaeger-LeCoultre Reverso watches should be an instant addition to your collection.

An iconic status symbol, Jaeger-LeCoultre Reverso watches are the most successful and famous members of the Swiss manufacturer’s back catalogue. In today’s fast-paced and ever-changing world of Haute Horlogerie, these exquisite timepieces have effortlessly managed to stay relevant, thanks to their unique balance of elegance and functionality.

It is not just in the style category that the Reverso excels either, as it is also incredibly durable. Its renowned rectangular shape and unique mechanisms render it virtually indestructible, making it an ideal companion for every situation. Watch collectors and connoisseurs alike are completely captivated by the classic design of the Reverso, and it is extremely easy to see why.