Offering incomparable performance, Breitling Avenger watches are a powerful expression of functionality and reliability. The extra-rugged, no-nonsense member of the manufacturer’s catalogue, this fantastic timepiece is a shock-proof, dive-proof tool that is built to help the wearer explore even the harshest of environments. Oozing chic while demonstrating impeccable precision, the Avenger is designed with its owner in mind. 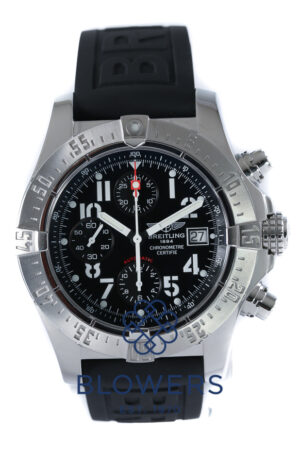 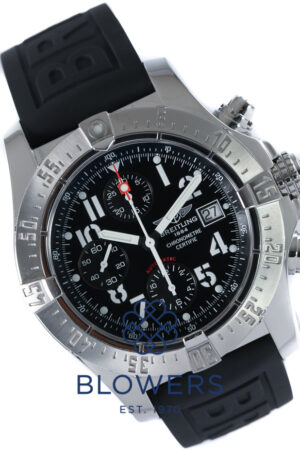 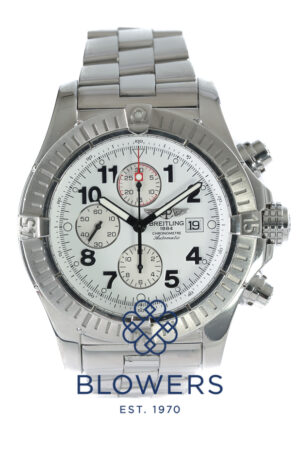 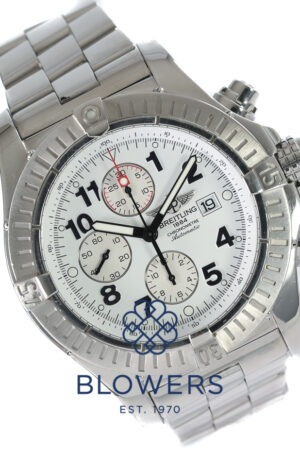 Breitling once again managed to prove its mastery of the sea and skies when it debuted the Avenger in 2001. The precise and rugged timepiece became an instant hit with aviators and the wider market, thanks to its remarkable resilience and reliability. References to its lofty origins can be found in the stenciled numerals on the dial, which are in the style usually found on aircraft hangars and aeroplanes themselves.

Two years after launch, the Avenger came back with a bang thanks to the launch of the Seawolf in 2003. Capable of reaching depths of 3000m, this legendary timepiece had a 44mm casing and was made from titanium. It boasted a helium escape valve on the side of its casing to equalise pressure on the inside. The casing itself was an impressive 18.4.mm thick and featured domed sapphire crystal with a thick anti-reflective coating on both sides.

A year later, Breitling unveiled one of its largest ever watches — the aptly named Super Avenger. Making for a powerful statement piece on any wrist, the timepiece measured a staggering 48mm in diameter and featured a hefty fluted crown and four bezel rider tabs positioned at 3, 6, 9, and 12 o’clock. These distinctive components were much more than eye candy however, as they were specifically designed for ease of operation, even when wearing gloves.

In 2013, the manufacturer presented an updated Avenger line to the Baselworld Watch and Jewellery show. All timepieces from this revised collection were classified under the name Avenger II and were equipped with exceptionally precise movements that were certified by the Official Swiss Chronometer Testing Institute (COSC). Models in this range include the Avenger II and Super Avenger II chronographs, the Avenger II GMT with second time zone display and the Avenger II Seawolf professional diver’s watch. Each one delivers fantastic performances on land, at sea, or in the air.

The Avenger Blackbird followed in 2014, named after one of the fastest and most well-known reconnaissance aircraft in the world, the Lockheed SR-71 — more commonly known as the Blackbird. Originally part of the Chronomat collection, the Blackbird branched off into the Avenger family in the guise of a high-performance sports watch. Like the plane itself, the timepiece was all black and was made from coated titanium.

Breitling once again showed off its manufacturing prowess in 2017, by unveiling the Avenger Hurricane. This timepiece was made from an entirely new proprietary material known as “Breitlight”, which was 5.8 times lighter than steel and weighed 3.3 times less than titanium, yet was still stronger than both substances. The dial design really enhances the watch’s military feel, while the version with a 24 hour display makes it extremely simple to determine whether it is day or night, making them ideal for locations such as a submarine or in polar regions. That same year, the manufacturer launched the Super Avenger 01 Boutique Edition, which was equipped with the in-house B01 calibre and could only be found in Breitling boutiques. Just 100 models of this exclusive range were ever made.

Part of a Unique Collection

The Breitling brand is synonymous with expertise in the sea and sky. This is reflected in its corporate logo, a winged anchor. It is therefore no surprise that the manufacturer has created a multitude of timepieces that are known for being robust and being water resistant to impressive depths. The Avenger collection is just one of these ranges.

Alongside the SuperOcean and Colt collections, Breitling Avenger watches belong to the Aeromarine family. They contain all the advantages of pilot’s and diving timepieces, and offer an outstanding combination of precision, robustness and design. Delivering first-class performances on land, at sea, or in the air — this fantastic range of wristwatches is definitely worth more than a fleeting glance.

A Watch for Every Situation

Breitling Avenger watches effortlessly bridge the gap between the sky and the ocean floor. Boasting all the functionality and readability you would expect from a specialist pilot’s timepiece, coupled with the toughness and water resistance of a diver’s watch, these excellent luxury wristwatches never fail to impress.

This striking range has been created to meet the demands of even the most physical of challenges. It is laser-focused to go bigger and bolder than any of the competition, with a dedication to robustness, reliability, and resistance. If you are a fan of rugged timepieces that can cope with any challenge, the Breitling Avenger makes for an ideal addition to your collection.