Introduced in the 1980’s, Breitling Colt watches were initially conceived as military timepieces. The Breitling Colt, as is the style for watches of its type, have a rugged, robust appeal, while also having a sporty design and the precision and durability that all military watches should have. In many cases, Breitling Colt watches stand as an excellent, affordable entry level model for prospective Breitling collectors. Each one boasts COSC-certified automatic movements, and quartz calibers, while being available at an excellent price. 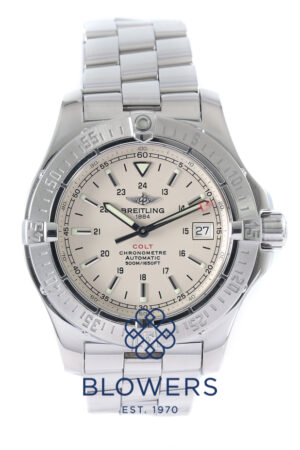 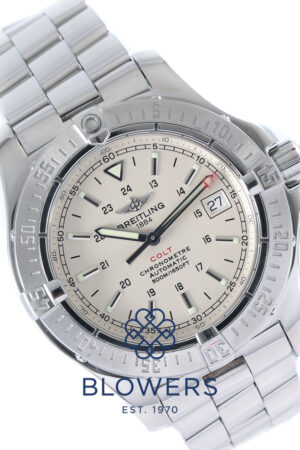 The History of Breitling Colt Watches

Upon its initial release, Breitling intended for the Colt to follow in the footsteps of other, similar watches released in the era and was aiming it squarely at the military industry. However, things didn’t quite go exactly how Breitling expected for the Colt.

Thanks to the reliability and strong design, the Breitling Colt attracted a more general audience. With near unmatched sturdiness, Breitling had stumbled upon a classic. The timepiece was one of the most accessible watches they ever produced, attracting a much broader audience.

The popularity of Breitling Colt watches have endured thanks to the collection’s functionality and efficiency, combined with a robust charm. However, the strength and military history of the collection can never be ignored. It featured a bold bezel with four rider tabs, first introduced on the Chronomat in 1984. The Colt’s bezel rider tabs have inscribed indices and are deliberately positioned for maximum handling, and to protect the watches sapphire crystal.

The Colt stands out from a lot of other military style watches thanks to its COSC-certified automatic and water resistance up to 200m. It also boasts a timeless stainless steel case to contribute to the functionally excellent design present throughout the collection.

Breitling Colt watches are available from 33mm to 45mm and contain three-hand watches as well as chronographs. Almost all Colt watches on the market were released with a choice of bands; from stainless steel bracelets, to rubber straps.

In 2014, Breitling released a brand new collection of Colts. A modernisation of an enduring classic. The traditional shape and iconic bezel were complemented by quartz automatic movements, as well as a handful of features that helped to endear the model to a new generation of men and women. This new Breitling Colt was released with models for men and women, and were all equipped with quartz.

The design of the quartz variations is overall similar to that of the rest of the collection, with one key difference. The traditional Breitling rider tabs were missing from all models produced in the period between 2011 – 2014.

The main appeal of the quartz Breitling Colts is the ‘Superquartz’ calibres designed to be much more precise than conventional calibres, and are able to easily compensate for fluctuations in temperatures.

Towards the end of the 2010’s Breitling began producing all new models of the Colt as part of a subcollection alongside the larger Avenger range. The technological and design similarities between the Avenger and Breitling Colt watches left many consumers with a difficult choice to make.

Thanks to the model’s roots as a watch for armed forces around the world, the Breitling Colt needed to be designed to hold up to the harshest of elements and able to withstand bumps, scratches and falls with as minimal damage as possible.

This gave the Breitling Colt collection an endearing build-quality and ensured that a majority of pre owned Breitling Colt watches on the market have stood the test of time and appear to be in as-good shape as some new watches you can buy today.

No matter what the need, there’s a Breitling Colt watch for you. There are three-hand Colt automatic models with bar indices filled with SuperLuminova so you can tell the time in the dark; whether you’re in a cave or out on a run, you always know the time.

Breitling Colts with A1738810 reference numbers have a 24 hour scale right in the middle of the dials and boasts a much more prominent and distinctive railroad minute track, allowing these models to stand out from the crowd and appear more elegant and refined than some of its more industrious contemporaries.

There is also a special 41mm Colt chronograph on the market that was released to recognise and pay tribute to the collections military roots, this model comes with a black stainless steel case and a matching black dial and textile strap. Perfect for a clean silhouette.