Designed specifically for professional pilots, Breitling Professional watches boast a unique blend of strength and style that is built to strict military specifications. The range includes all timepieces that incorporate movements with complications (anything above and beyond temporal information), including the Emergency II, Cockpit B50, and the Aerospace Evo. Built by professionals, for professionals, their vast array of styles means you should easily be able to find one that suits your taste. 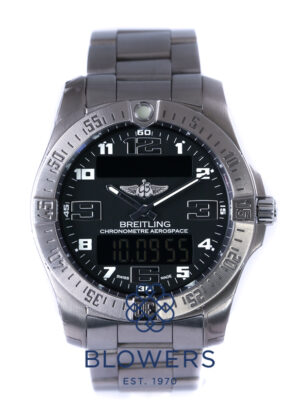 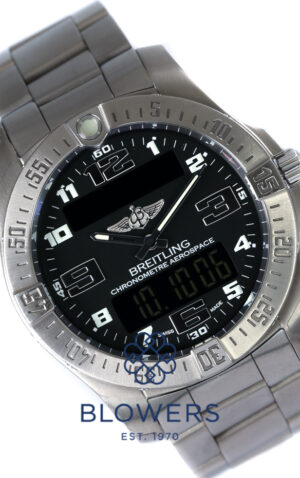 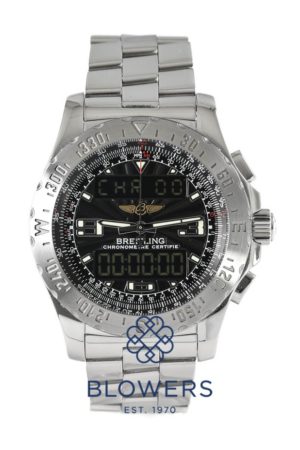 The History of Breitling Professional Watches

Ever since it created the reliable onboard clocks that were favoured by global air forces in the late 1930s, building instruments for professionals has always been at the heart of the Breitling brand. This trend continued following the takeover of the company by entrepreneur Ernest Schneider in 1979. While working hard to ensure the brand’s heritage with collections such as the Navitimer, Schneider also opened the door to the latest technological advancements and developed multi-functional instruments intended for adventurers and professionals alike.

The year 1985 saw the introduction of the Aerospace, which was equipped with the latest generation of Swiss technology such as analogue and digital displays and two LCD screens. Perhaps what made this innovative multi-functional quartz chronograph unique was its simple and logical control system. Each of its functions can be accessed simply by turning, pressing, or pulling its single crown. As a nod to the successful Chronomat timepiece, the Aerospace also retains the signature rider tabs on the bezel.

Some ten years later, Breitling developed what would become a lifesaving device for adventurers and pilots, the Emergency. This high-tech timepiece integrated a micro transmitter that was capable of sending signals to the international air distress frequency. Throughout its development, the Emergency would be rigorously tested to ensure reliability, both in the laboratory and in real-life situations, under a variety of conditions. So successful did it become, that the wristwatch was used by some of the world’s most famous jet teams, such as the Frecce Tricolori, the Patrouille Suisse and the Blue Angels.

Then, in 1999, the Breitling Emergency completed a gruelling non-stop, around-the-world balloon flight on the wrists of Bertrand Piccard and Brian Jones. Riding on the Breitling Orbiter 3 balloon, the men started from Château-d’Oex in the Swiss Alps on the 1st of March, before passing over Morocco, India, Guatemala, and Mauritania, then landing in the Egyptian desert on the 29th of March. A year later, the balloon was displayed in the Smithsonian National Air and Space Museum in Washington, D.C., the world’s most prestigious aviation museum.

To improve the reliability of the rescue signal and help first responders better coordinate search and rescue missions, Breitling improved its Emergency timepiece in 2013 to make it the world’s first and only wristwatch that has a built-in double frequency personal locator beacon. This new line of timepieces, the Emergency II, can send distress signals on both the old 121.5MHz signal but also at the more reliable 406MHz frequency.

A few years later, in 2015, the manufacturer launched its own connection watch, the Exospace B55. This allowed the smartphone to act as a controller for the timepiece, for example to adjust time zones, the alarm, and chronograph functions. The user was also able to upload watch data such as chronograph measurements of flight times, split times, and lap times to their phone. Three years after this, Breitling launched the Exospace B55 Yachting, extending its reach from the piloting world to yachtsmen and the open seas.

The year 2020 then saw the manufacturer move more into the athletics sphere with the Endurance Pro. It was designed to be a lightweight wristwatch for professional athletes and a casual, everyday sports chronograph. Blending high precision with innovative technology, while displaying a vibrant and colourful design scheme, this is the ultimate leisure watch.

The Ideal Watch for Aviators

Boasting high-end performance and cutting-edge functionality, Breitling Professional watches have acquired a special place in the hearts of pilots and adventure seekers alike. Perhaps the shining example of this is the Professional Aerospace series, which is equipped with many technological features such as a second time zone and an audible time indicator. The visibility of the timepiece is enhanced further thanks to its ingenuitive backlighting display system.

Other notable members of the Professional family are the Skyracer and Airwolf families, whose stylish steel and black look have earned them the nickname “Raven”. Both of these fantastic ranges offer seamless functionality, rugged reliability, and impeccable performance — precisely what you need whether you are in the cockpit or any other high-octane situation. If you are a fan of living in the fast lane, you should definitely take a look at this stunning collection.

For Adventure Seekers and Sportsmen Alike

The Professional collection is also ideal for those who prefer their wristwatches to be aesthetically striking. Boasting strong and robust design choices, these no-nonsense timepieces have a strong and masculine look that can enhance the look of any outfit. Whether it is a pilot’s uniform, adventure gear, or sharp business suit, Breitling Professional watches always make you look the part. Why not consider adding one to your collection today?