Designed with professional and military divers in mind, Breitling SuperOcean watches are some of the most reliable chronographs on the market. A real trailblazer, the timepieces are made for some of the deepest underwater adventures. An extraordinary watch that meets every demand, this collection will satisfy those who appreciate excellent quality and appeal to divers of all experience levels. They are also incredibly striking, making them the perfect combination of style and functionality. 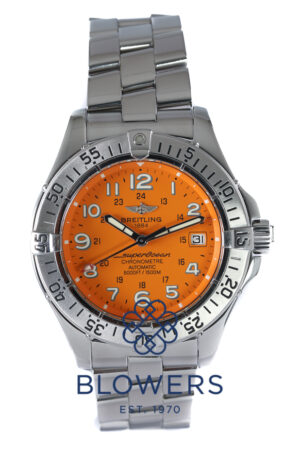 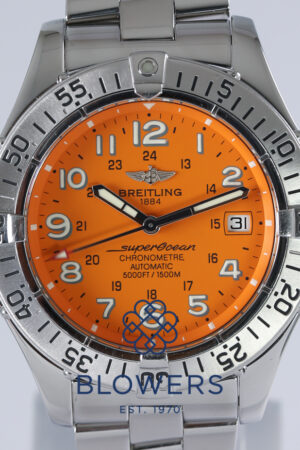 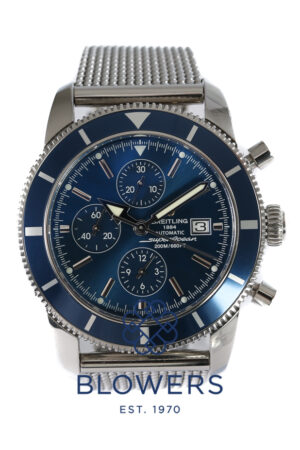 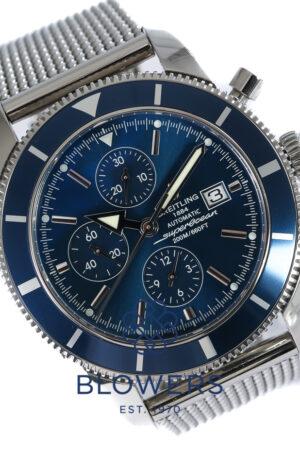 The History of Breitling SuperOcean Watches

Breitling claims that the SuperOcean defines the classic diver’s watch, and they certainly are not far off the mark. In the 1950s, diving watches were becoming increasingly popular and companies such as Rolex and Omega had already begun establishing themselves with the Submariner and Seamaster respectively. While Rolex’s offering could manage a depth of 100m, Omega’s model was capable of reaching 62.5m.

In 1957, Breitling threw their hat in the ring with the simultaneous launch of two groundbreaking diver’s watches — a time-only model (Reference 1004) and a chronograph (Reference 807). Both were known as the SuperOcean and were capable of reaching depths of 200m, instantly elevating them above the competition. Each timepiece was unique in design, with the 1004 aimed more at the stylish gentleman at the beach, while the 807 is for the seasoned diver who needs a reliable timepiece. Both dials were simple and practical, with large Arabic numerals and oversized hands for easy readability.

The timepieces were an instant hit with the diving community, prompting Breitling to forge ahead with plans for the collection. The year 1964 saw the development and release of the SuperOcean 2005, which was famed for its slow motion functionality. One issue that the timepiece faced was the difficulty in seeing whether the chronograph had actually started. To overcome this problem, Breitling added a disc shaped walking indicator at 6 o’clock. If the disc was black, it meant the chronograph had stopped, while a yellow colour meant it was running. Black with a yellow dot signified that the chrono was on pause. This invention was a truly monumental occasion.

Some six years later, the successor to the SuperOcean 2005 was launched — the SuperOcean 2005 Execution 2. It featured a remodeled dial with a sweep second at 9 o’clock, while the hands were much shorter and thicker than its predecessor. Then, in 1983, Breitling once again pushed technological boundaries by unveiling the SuperOcean Deep Sea. While the previous incarnations of the SuperOcean catalogue were either worn by seasoned divers or gentlemen at a beach club, this new version was definitely focused at extreme and well-trained divers — given it could reach depths of 1000m. This was made possible thanks to the patented helium escapement case-back that acts as a valve to let accumulated helium escape.

More incarnations of the SuperOcean followed in the 1990s, such as the Reference ​​A17040 with its four prominent bezel rider tabs. These small protrusions make the bezel easy to grip, while the addition of several small screws meant the bezel could never accidentally detach from the case. Then, in 2005, Breitling presented the SuperOcean Steelfish. This new iteration set itself apart from the rest in two distinct ways. It had a much tidier dial and was capable of reaching depths of 1500m. A year later, the Steelfish X-Plus was launched, which can survive depths of 2000m.

In 2007, Breitling SuperOcean watches celebrated their 50th anniversary with the SuperOcean Heritage Collection. A tribute to the very first model, it featured a braided steel bracelet and the old 1950s logo on the dial. Some four years later, the SuperOcean 44 and SuperOcean 42 were brought to the market. Both featured moulded rubber inserts, while the smaller model had a contrasting red, yellow, blue, white or orange ring around the edges of its black dial. These were followed by the SuperOcean II in 2015, which was available in three sizes, each with differing water resistances.

To celebrate the collection’s 60th birthday, Breitling launched the SuperOcean Heritage II. The main development here was the introduction of a new steel bezel with a scratch-proof ceramic ring that was totally shock-resistant. Meanwhile, the SuperOcean II received an upgrade in 2019 and now goes by the name SuperOcean Automatic. The main changes are purely cosmetic and most prominent on the dial.

While the vast majority of Breitling SuperOcean watches are highly sought-after, perhaps the most coveted pieces come from the vintage collection. Models such as the three-hand Reference 1004 and the Reference 807 chronograph from the 1950s really stand out from the crowd with their distinctive design choices. In particular, the inward sloping bezels and slim 39mm cases really set them apart from the competition. They are also extremely scarce in number, something that makes them even more desirable.

Chronographs from the 1960s are very popular with collectors as well, in particular the References 2005 and 2105. Both have unique features, such as the Reference 2005’s “slow-motion function” that sees the central chronograph hand complete a full rotation every hour rather than per minute. This is particularly useful for divers who need to track their dive time to the exact minute. Meanwhile, the Reference 2105 boasts the famous Chrono-Matic calibre — one of the first automatic chronograph movements. Released in 1969, this movement is the result of a collaboration between Breitling, Heuer, and others, and can also be found in timepieces such as TAG Heuer’s Monaco and Carrera models.

Since 1957, the SuperOcean has been one of Breitling’s most comprehensive collections and an integral part of the Swiss manufacturer’s catalogue. It is the result of the company’s close connection with the ocean, which is reflected in their logo — the anchor with a winged B initial. Prior to the SuperOcean’s launch, Breitling had previously been well-known for creating aviator watches, so this brand new range opened up a whole new arena for the watchmaker to flourish in.

One of the most important aspects of a diver’s watch is naturally its water-resistance, and it is in this area that the SuperOcean excels. While some models can reach 300m, the SuperOcean Automatic 46 boasts depth capabilities of 2,000m. Other pieces feature an automatic helium escape valve for professional saturation divers. The collection contains plenty of options for both men and women alike — meaning there really is something for everyone.

If you are a fan of deep sea exploration, Breitling SuperOcean watches should definitely be on your radar.