The Cartier Ballon Bleu watch is a model that starkly stands out amongst the other pieces by the Parisian brand. How is it possible for a company who famously creates timepieces deliberately not round, to name a watch ‘blue balloon’. Well they did it, and they did it a way only Cartier knows how, oozing style and finesse. 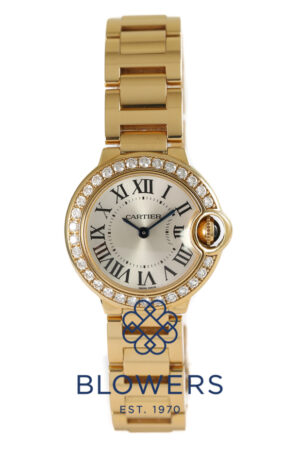 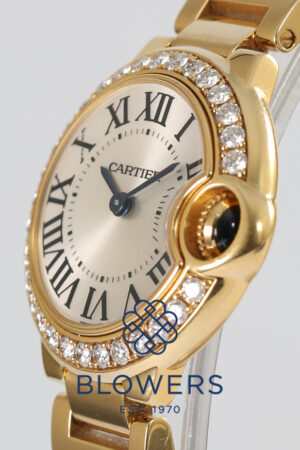 The name and design of Cartier Ballon Bleu watches is taken after hot air balloons. A beautiful marvel of engineering held together with slender support was the idea that inspired the creation and design of the Ballon Bleu. A poetic, artistic name for one of the most artistic watches Cartier have ever produced.

The Ballon Bleu line was introduced in 2007, it perfectly combines the intricate engineering of watchmaking, with the fine artistry of jewellery to create something unique and special.

Unlike most of the pieces in the Cartier catalogue, the Ballon Bleu is rounded. It also boasts short lugs, a rounded bezel, and a slim bridge protruding from the caseband to protect the crown.

When viewing the watch in profile, its design evokes a perfectly smooth pebble, rounded on all sides. A breathtaking feat of craftsmanship and artistry.

Cartier made a conscious effort to go against the grain when designing the Ballon Bleu. It is designed to follow the curve of the arm, to sit gently between the bones of your wrist. This is in order to add to the comfort of the watch, but also ensure that it fits perfectly on everybody that wears a Ballon Bleu.

The unisex design lends itself well to modificationm with ample space for gems should you wish. The base versions of the Cartier Ballon Bleu watch comes in steel, gold, and steel and gold and can be accompanied with either a matching bracelet, or leather strap.

The simple yet elegant design proved a monumental hit and the Ballon Bleu became one of Cartier’s most successful watches.

Since the original release of the Ballon Bleu, the model has become a hallmark model for the Parisian manufacturer, and they often choose it to launch new innovations and technology.

In 2009, Cartier released the Ballon Bleu Flying Tourbillon, the first watch by the famous watchmakers to contain a manufacture complication movement certified with the Geneva Hallmark.

Later that year, Cartier chose the Ballon Bleu as the basis for their first ever concept watch, the ID One. Designed to show off a number of technological advancements Cartier hopes to be able to use in the future, the ID One never needed to undergo any reparation after manufacturing, and was made out of Niobium-Titanium, a unique material designed to have unmatched shock-absorption and wear resistance.

Few watches have captured the imagination and attention of the watch loving world as much as the Cartier Ballon Bleu. Its appeal extends from people looking in the windows of jewellers to royalty. It represents an elegant choice for any would-be buyers.

Cartier has long been established as an elite luxury jeweller, and in 1904 the Parisian jewellers received their first appointment as official purveyor to British Royalty, King Edward VII.

Since then Cartier jewellery and watches have frequently been worn and shown off by royalty from across Europe and the world.

In 1938, the then Princess Elizabeth was given the smallest wristwatch in the world made by Cartier as a gift.

And the watch industry was shaken in the 1990’s when Princess Diana began going to formal occasions wearing a Cartier Tank on her wrist, prompting sales of that particular model to skyrocket.

And today, over 100 years after Cartier jewellery was first appreciated and worn by a British royal, The Duchess of Cambridge, Kate Middleton is known to adorn an elegant Ballon Bleu De Cartier watch on her wrist.

The watch perfectly complements her glamorous outfits and adds to the iconic style of the future Princess of Wales and Queen Consort.

One of the key appealing factors of Cartier Ballon Bleu watches is the refined elegance and simplicity. It stood out in a market becoming oversaturated with embellishment and flashiness upon release, and it still stands out today.

Simplicity can be beautiful. The Ballon Bleu’s understated design means it can compliment any outfit, stand out in any room, and suit any wearer.

The Ballon Bleu transcends generations, it is a truly timeless timepiece that will never go out of style and can be enjoyed by future generations.