Innovative, robust and versatile, IWC Aquatimer watches completely revolutionised the diving watch scene. Despite being relative newcomers to the party, these exquisite timepieces have countless admirers in the water as well as on land. Thanks to their ingenious technologies and maritime aesthetics, they easily leave a lasting impression on watch aficionados and collectors alike. Consistently changing and created to cater for the every need of divers, they are the perfect example of evolutionary watchmaking. 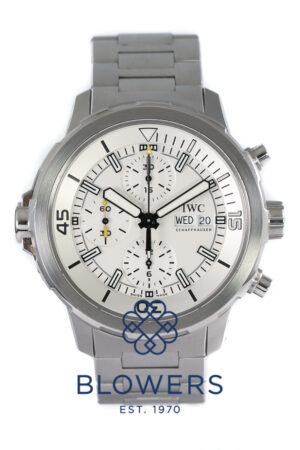 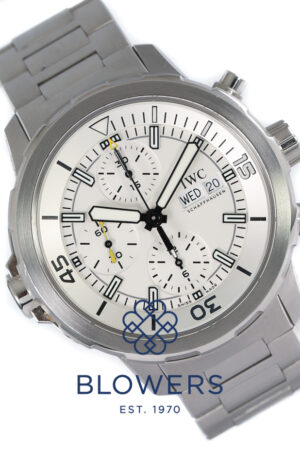 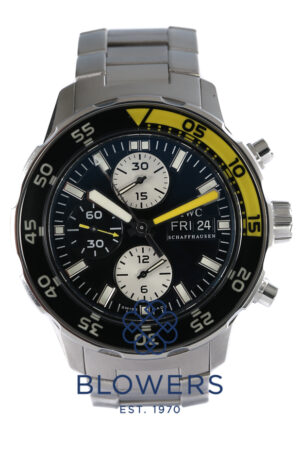 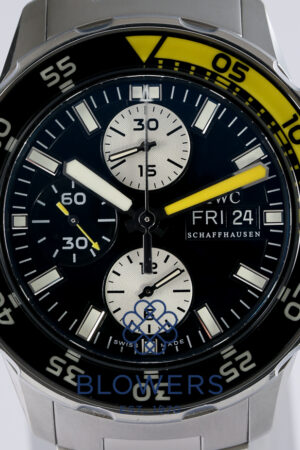 The History of IWC Aquatimer Watches

The very first IWC Aquatimer was launched at a time when the sport of diving was all the rage. It was shown off at the Basel Fair of 1967 and was powered by the manufacturer’s Calibre 8541 movement. While it is considered today to be a classic and is incredibly sought-after, it perhaps may have been viewed as too conservative at the time — which is perhaps why the watchmaker decided that an upgrade was needed. In March of 1968, construction drawings commenced for its successor. This model was more radical in its design, and continued to be produced for around ten years.

After a very rocky 1970s where the manufacturer almost closed its doors, the company was sold to German instruments manufacturer, VDO. With this came a brand new strategy, to develop more sportier watches that would attract a younger clientele. One of the ideas to achieve this was to collaborate with Porsche Design, a union that saw the creation of the Ocean 2000. Modern yet classic, it was the first commercially-produced wristwatch that could withstand the pressures of 2,000 metres. Several variations of this were created over the subsequent years.

IWC’s collaboration with Porsche Design came to an end in the late 1990s, a partnership that lasted around 20 years. By this time, the Swiss mechanical watch industry was witnessing a resurgence. In 1997, the manufacturer launched a new model line called the “GST” (gold, silver, titanium), and in this collection was the GST Aquatimer. A classic diving watch, it was noticeable for its clean, no nonsense design. Just two years later, a very special timepiece was launched, known as the Reference 3527 or “Deep One”. It had a mechanical depth gauge to show the diver how far they had descended.

The 2000s saw the creation of a new breed of IWC Aquatimer watches, which are fresh and sporty in design, yet still being consistent with a strong tradition. Moving into unchartered waters, these timepieces really know how to push the edge of exploration.

IWC Aquatimer watches are not just made to satisfy the needs of divers, they also support various important causes across the world. One such collaboration is with the Charles Darwin Foundation (CDF), which is dedicated to protect the unique flora and fauna that is found in the Galapagos Islands. The cooperation between IWC and CDF has resulted in numerous special editions that commemorate the world-famous evolutionist and his life’s work, such as the Aquatimer Chronograph Edition “Expedition Charles Darwin” and the Aquatimer Chronograph Edition “Galapagos Islands”.

Charles Darwin is not just the only famous name that IWC has collaborated with either. The company has also made special editions such as the Aquatimer Automatic Edition “Expedition Jacques-Yves Cousteau”, and Aquatimer Chronograph Edition “Expedition Jacques-Yves Cousteau”. Another popular timepiece is the Ocean 2000, which is the result of a close working relationship between IWC and Porsche. Boasting a titanium case that is waterproof until 2,000 metres and protects the watch from corrosion, this wristwatch is now exclusively available pre-owned since it was discontinued in the 1990s.

Innovation at its Finest

Robust and incredibly versatile, IWC Aquatimer watches are able to leave a lasting impression thanks to their ingenious technologies and maritime aesthetics. Not only do they perfectly complement wetsuits, but also more polished attire as well.

While its distinctive internal bezel dates all the way back to the original model from 1967, IWC has replaced the corresponding crown with an external bezel. This safe-dive system is unique to IWC Aquatimer watches and is now a key feature of the collection. It is designed to prevent the wearer from accidentally adjusting the bezel itself.

With this particular collection of diving watches, IWC has proved once again that it deserves its position at the pinnacle of Haute Horlogerie. Durable yet decadent, these timepieces are incredibly sought after.