A celebration of the special relationship between IWC Schaffhausen and the aviation industry, IWC Pilot watches are world renowned for their precision and state-of-the-art mechanics. Inspired by cockpit instruments, the collection has become a true icon in the horology world and is built intuitively for aviators both professional and amateur. From classic models and ceramic chronographs, to more complex creations with tourbillons and perpetual calendars, there really is something for everyone. 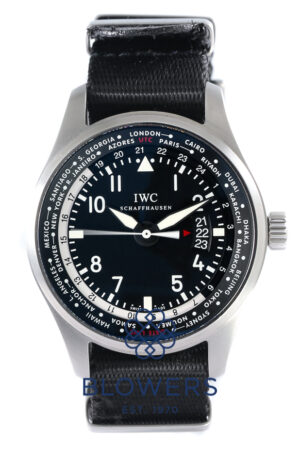 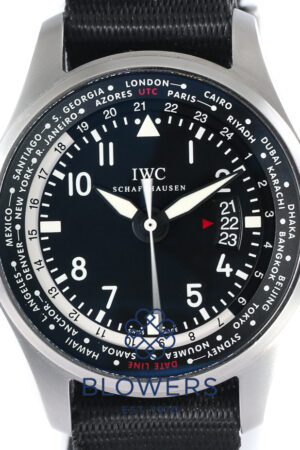 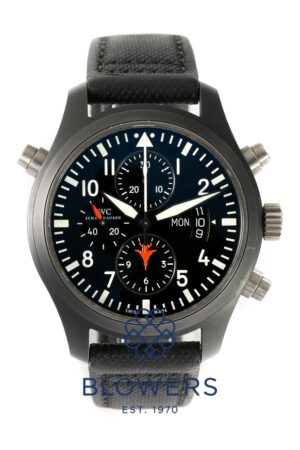 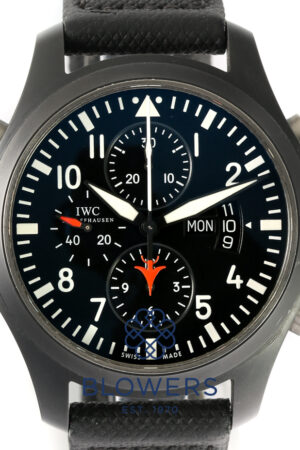 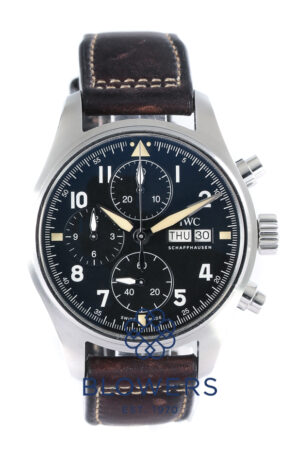 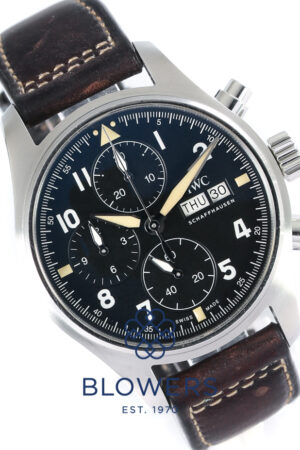 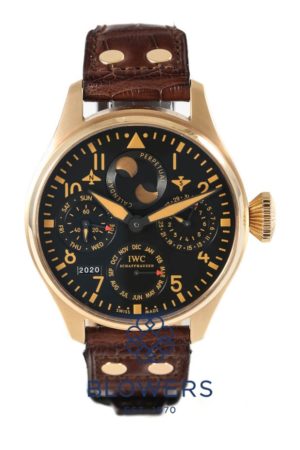 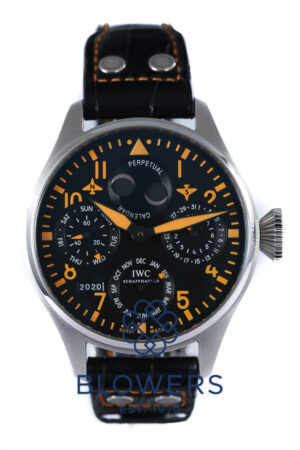 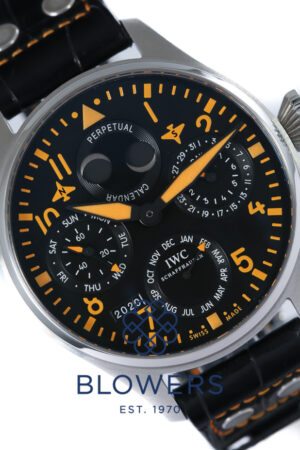 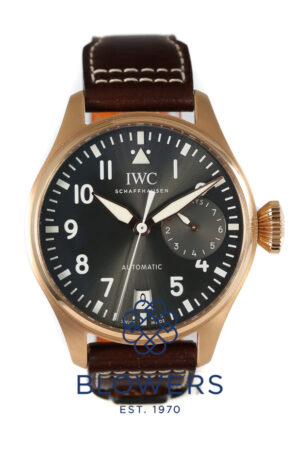 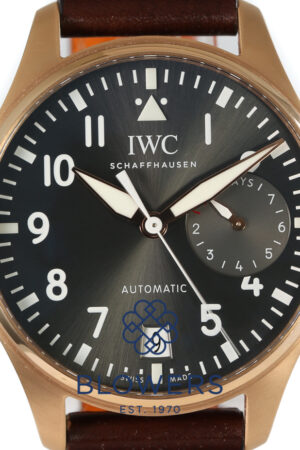 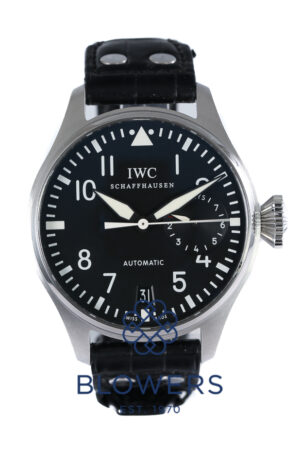 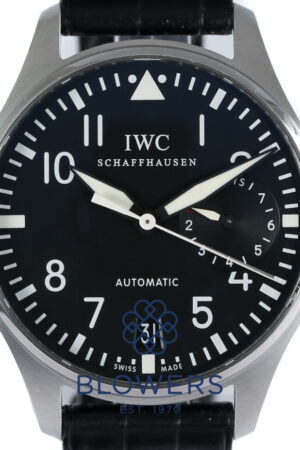 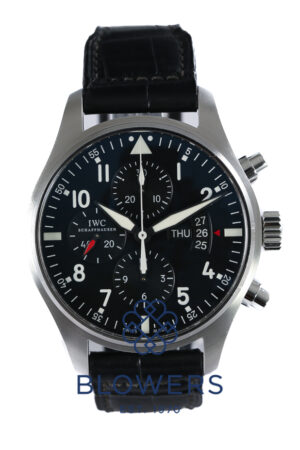 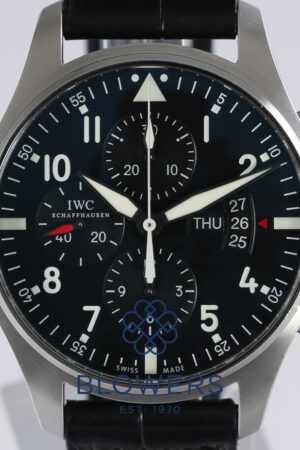 The History of IWC Pilot Watches

Setting the standards for decades to come, the IWC Pilot watch was specifically designed to measure precision down to the millisecond, with an extremely robust casing that could withstand high pressures and widely varying temperatures. Powered by the manufacturer’s Calibre 83 movement, it featured an antimagnetic escapement, and a rotating bezel. It was wound by large crowns that were specifically designed for better grip. Perhaps the most iconic element of the timepiece was the triangular index at 12 o’clock, which allows pilots to instantaneously recognise the position of hands and the time at a glance.

As the original Pilot watch slowly established itself as a success, IWC released the first legendary Big Pilot’s watch just four years later. It was originally supplied to the German Air Force in a limited edition collection of just 1,000 pieces. Measuring 55mm wide, it remains IWC’s largest ever wristwatch. Several years after this, the company developed a service watch for the British Royal Air Force — the Mark 11. First issued in November 1949, it remained in service right up until 1981.

The year 1992 saw the introduction of the Reference 3711, or Pilot’s Watch Double Chronograph. It was unveiled at the Basel Watch Fair and was the brand’s first ever automatic double chronograph. Several new members of the family were introduced over the coming years, each one responding to new discoveries or tackling the unique needs of the aviation industry. One example of this came in 1998 with the Pilot’s Watch UTC, which enabled pilots to change the date and time just by using the crown.

Most noteworthy in the history of IWC Pilot watches is 2002’s reintroduction of the Big Pilot’s watch. Featuring a seven day power reserve and a large date display at 6 o’clock, it was instantly recognisable by IWC enthusiasts everywhere and remains one of the brand’s most iconic and collectable timepieces. Just one year later, the brand welcomed the IWC Pilot’s Spitfire, which paid tribute to the legendary fighter plane of the same name. Then, the manufacturer introduced Pilot’s Top Gun watch, inspired by the famous flight school and 1986 movie.

To celebrate the collection’s 80th anniversary in 2016, IWC launched the Mark XVIII Edition Le Petit Prince, which paid tribute to the famous novel by Antoine De Saint Exupéry. Considered a national hero, Exupéry was regarded as a great pilot, writer, and humanist. Just three years later, the brand introduced their latest invention, named Ceratanium. This ingenious creation was used on the Pilot’s Double Chronograph Top Gun Ceratanium, and features the same lightweight and rigid properties of titanium, alongside the scratch-resistant nature of ceramic.

The IWC Schaffhausen brand has the closest connection to the world of aviation than perhaps any other Swiss watch manufacturer. Its very first foray into the sector came in 1936 with the launch of the “Spezialuhr für Flieger” (special watch for pilots). Other notable creations include the Pilot’s Watch Chronograph and Pilot’s Watch Double Chronograph which were inspired by the famous 1930s German transport aircraft “Junkers Ju 52” — nicknamed “Iron Annie”.

Each timepiece has been carefully designed to provide easy legibility in all conditions, thanks to its iconic large conical crown, dark coloured dials and luminescent display. It is this attention to detail that has seen the range become one of the most sought-after and respected by aviators of all abilities.

It is not just aviators that covet this collection. IWC Pilot watches are also admired by timepiece enthusiasts from across the world, thanks to their exquisite design features and high-quality craftsmanship. Whichever one you choose, you are sure to be bowled over by their timeless elegance.

A huge success since 1936, IWC Pilot watches have easily become one of the brand’s flagship collections. Perhaps the crowning achievement of these exquisite timepieces is the fact they effortlessly take into account the needs of pilots, while pairing this up with an exceptional focus on instrument functionality and design. Because of this, the Pilot watch has become one of the real darlings of the market.

Such is the diversity of the collection that there really is something for everyone. From the fashionable and functional Pilot’s Watch Chronograph and Pilot’s Watch Double Chronograph to the Big Pilot’s Watch, Top Gun and “Le Petit Prince”, there are pieces to suit any taste and style.

History enthusiasts will also be enchanted by the vintage models from the Pilot Watch collection. Rare treasures from the pioneering days of aviation are there to be discovered, with some still available today. Whether they are new, pre-owned or vintage timepieces, each one embodies the innovative values that IWC stands for.