Patek Philippe annual calendar watches have emerged as a true success story for the Genevan manufacturer. Designed to appeal to a whole new generation of watch enthusiasts, this exquisite collection of timepieces offers a more user-friendly and innovative alternative to traditional calendar wristwatches. 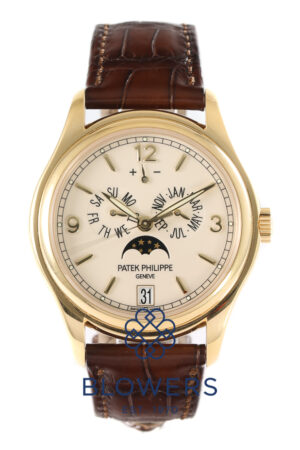 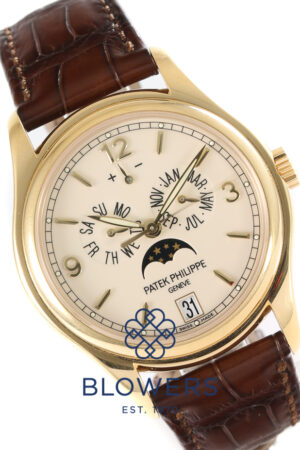 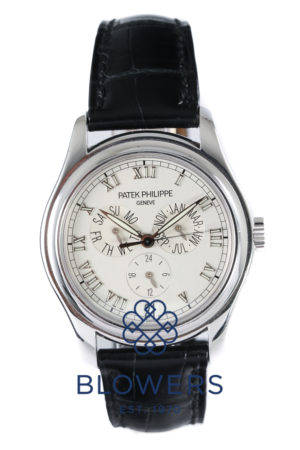 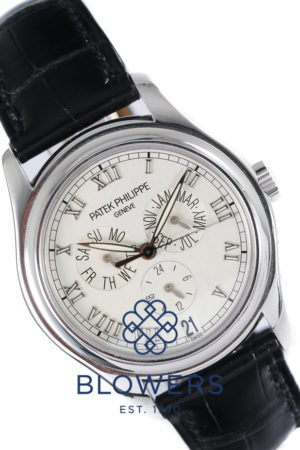 First released in 1996, Patek Philippe annual calendar watches caused a real commotion amongst wristwatch enthusiasts. Alongside their numerous aesthetic and technical qualities, this innovative collection of timepieces offered a complication that was considered to be extremely easy to use. The first of these watches, the Reference 5035, managed to win Watch of the Year in 1997 and spawned an entirely new category of “useful” complications. Two years later, the brand released the first annual calendar with a moon phase indicator. Things went quiet when it came to production until 2004 when the Gondolo Calendario was launched. Given the Reference 5135, this timepiece was the first tonneau-shaped model that featured aperture display indicators.

In 2007, Patek Philippe revealed the Reference 5033, one of the most complicated annual calendar watches in the company’s entire inventory. Marking the first time a minute repeater featured in the collection, this timepiece boasted a lever on the casing’s left side that enables the time to be chimed on demand. That same year, the Reference 5235 was released, which was the first time a regular display appeared in the collection.

Over the years, Patek Philippe trialled many different ways to display the various indicators used in the annual calendar collection. The least intrusive of these was released in 2010 with the introduction of the Reference 5205. This particular timepiece featured the day, date and month at the top of the dial, with the large subdial at 6 o’clock carrying both the moonphase and 24-hour indications. Two years later, the first annual calendar version of the Nautilus was released.

For the 20th anniversary of the collection’s release, Patek Philippe unveiled the Reference 5396. This stunning wristwatch was both intended as a celebration of the significant milestone and the watch world overall. Unlike the very first iteration of the collection, this timepiece features a moonphase, day, date and month indications.

From 2005 to 2008, Patek Philippe annual calendar watches were also available in a limited edition collection, known as the Advance Research timepieces. This ground-breaking range debuted brand new innovations and were designed to focus exclusively on implying and developing new materials. It also further demonstrated the brand’s unwavering commitment to technological advancements in the world of luxury horology.

The first of these innovative timepieces was the Reference 5350, which was available in white gold. This 100-piece limited edition model introduced a revolutionary silicon-based escape wheel for a Swiss lever escapement, and was powered by the Calibre 315 S IRM QA LU S movement. A year later, the second of the Advance Research timepieces came in the form of the Reference 5350. Available in rose gold, this collection of 300 wristwatches used the new Spiromax balance spring and boasted the Calibre 324 self-winding movement.

Finally, the third member of the Advance Research family was released in 2008. This wristwatch was available in a limited run of 300 pieces and came in platinum. It was powered by a self-winding 324 S QA IRM LU calibre, featuring the new Pulsomax silicon-based escapement and a moon phase and power reserve indicator.

Patek Philippe annual calendar watches were the answer to a very specific question. In 1992, the president and owner of the brand challenged his watchmakers to create a timepiece that could bridge the gap between simple calendar functions and the mechanically elaborate and (for some) prohibitively expensive perpetual calendars. It took four years for the result of their endeavours to be made public.

These ingenious timepieces have emerged as some of Patek Philippe’s flagship models. Their complications indicate the dates for months of 30 and 31 days in length and only require one correction each year – from February 28th or 29th to March 1st. This lets them sit perfectly between the plain calendar (which needs to be adjusted five times per year) and the perpetual calendar that requires no adjustment whatsoever.

Aesthetically pleasing, these highly innovative timepieces are ideal for those who really enjoy wristwatches that push the boundaries. They stay true to Patek Philippe’s unwavering commitment to technological advancements and would be the perfect addition to anybody’s collection.