Artistically-centred, Patek Philippe Golden Ellipse watches effortlessly blend class with simplicity. Their unique design have enabled the collection to become one of the brand’s most recognised timepieces from the company’s entire catalogue, and really break the mould when it comes to design conventions. 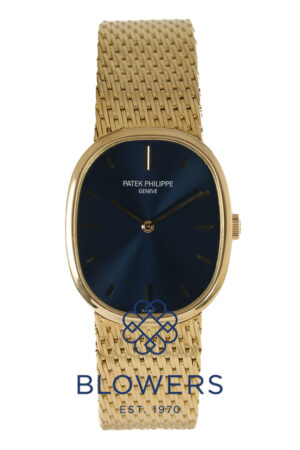 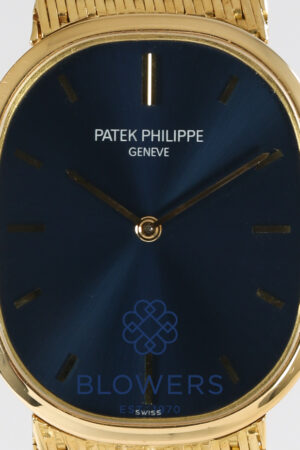 First launched in 1968, Patek Philippe Golden Ellipse watches immediately demanded attention. Also known as the Ellipse d’Or, these simple yet stylish timepieces indicated only hours and minutes, and featured just 12 indexes around its no-frills blue dial. Neither round nor square, these luxury wristwatches introduced a bold, new style for the brand. The move proved to be extremely popular, with the 1960s jetset immediately agreeing that it was the perfect accessory to an exquisite lifestyle.

Shortly after its introduction, Patek Philippe presented various different versions of the Golden Ellipse in both white and yellow gold. These variations included features such as woven mesh bracelets, more pronounced bezels, Roman numerals, and the inclusion of diamonds. The watchmaker also experimented with exotic dial hues, although the original blue tone still remained constant. By the end of the 1970s, the collection consisted of around 65 versions, with the design proving so popular that corresponding accessories such as rings and cufflinks were also offered.

In 1977, Patek Philippe Golden Ellipse watches received an important update in the form of the ultra-thin Calibre 240 movement. Comprising 161 components, this incredibly powerful movement is just 2.53mm in height and has served as the mechanical heart of the collection ever since. The first two timepieces to sport this calibre were the References 3739 and 3738. A further 15 variations were launched between 1977 and 2008, each with a wide variation of styles, colours and design features.

To celebrate the collection’s 40th anniversary, Patek Philippe unveiled a limited edition “jumbo” version of the timepiece in platinum. It was immediately received with a great deal of excitement, thanks to the original beauty of the wristwatch translating perfectly into the 34×39.5mm format. In addition, the watch featured the original navy blue dial with filigree hands.

A further 10 years later, the watchmaker launched the most recent iterations of the collection to mark its 50th anniversary. Also in the same jumbo size as their 2008 predecessor, these two timepieces bore the References 5738/50P-001 and 5738R-001. The former was a limited edition run of 100 pieces that boasted a platinum case and an 18 karat gold black enamel dial, with a hand-engraved volute motif in white gold that was inspired by the brand’s Calatrava cross emblem. The solid caseback is decorated with a commemorative engraving that reads: “Ellipse d’Or 1968 – 2018.” The Reference 5738R-001 was an unlimited model that came in an 18 karat rose gold case. It featured a sunburst-finish black enamel dial with hands and hour appliqués in rose gold.

While the vast majority of luxury wristwatches have round or square dials, Patek Philippe Golden Ellipse watches dared to be different. Sporting a unique elliptical shape, these groundbreaking timepieces represented something the market had never been seen before. Indeed, it is this distinctiveness that helped the collection quickly become a cult classic. Of course, being a Patek Philippe watch, things are not that simple – these timepieces are much more than your average oval.

The shape of the watches is based on the ‘golden ratio’ (hence the name), otherwise known as the Fibonacci sequence. This mathematical proportion is found everywhere in nature, such as beehives and flowers. It is also replicated in art (such as Botticelli’s The Birth of Venus) and architecture (the Egyptian Pyramids). Additionally, the ratio has been scientifically proven to have an aesthetically-pleasing effect on the brain – meaning that just looking at one of these exquisite wristwatches is a pleasurable experience.

With so many Patek Philippe Golden Ellipse watches available, you are virtually guaranteed to find the perfect style for you. Despite the wide range of variations, there are some design principles that have held true throughout the collection’s over 50-year history. While a lot of this has to do with the unusual shape, there is also the blue dial, and the simplicity of the hands, hour markers and the well-hidden lugs. Although the construction and finishing has continuously evolved over time, these core principles have given the Golden Ellipse a really timeless quality.

In a world dominated by complications, Patek Philippe Golden Ellipse watches are quite deceptive. While you could be forgiven for thinking that this is a collection that simply prefers to let the design do the talking, taking a closer look shows that there is much more than meets the eye. It is the thinnest wristwatch in the entire catalogue, and since 1977 it has featured an ultra-thin movement that manages to pack an impressive 161 components into a calibre that is just 2.53mm high.