Some of the world’s famous and coveted luxury timepieces, Patek Philippe Nautilus watches have skyrocketed in value in recent years. Designed by the legendary Gérald Genta, these iconic models were the brand’s first steel sports watch and have become a real ‘holy grail’ for enthusiasts and collectors alike. 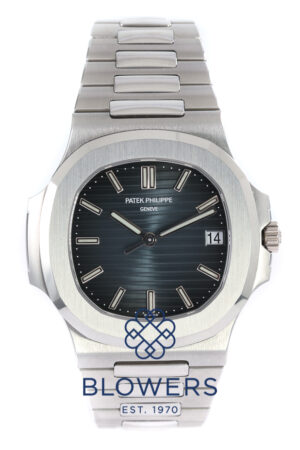 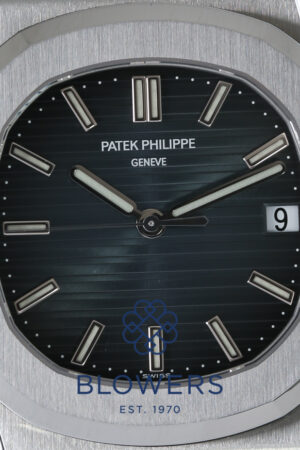 The very first Patek Philippe Nautilus was released in 1976 and given the Reference 3700/1. It was later given the nickname “Jumbo” thanks to its generous 42mm diameter and was powered by a thin, self-winding movement that was developed in 1967 by Jaeger-LeCoultre for Vacheron Constantin, Patek Philippe and Audemars Piguet. Two years later, Patek developed a prototype model, with a ribbed white dial. This extremely rare model actually sold for Swiss Francs 250,000 at auction at Sotheby’s Geneva in 2015.

Reaction to the Nautilus was rather slow and muted at first, however this all changed in 1980 when the brand released the first ladies’ piece in 1980, followed a year later by a mid-sized men’s version (Reference 3800) that measured only 37mm in diameter. Once the smaller version was in circulation, the larger model gained the “Jumbo” nickname and finally ceased to be produced in 1990. Over a decade after the release of the smaller Nautilus, the watchmaker unveiled a model that had Roman numerals and a smooth dial. Given the Reference 3800/1A, it featured a central seconds hand and the new 335 SC calibre.

Patek Philippe then launched a Nautilus in its original 42mm size, the Reference 3710. Released in 1998, this model was characterised by applied Roman numerals and a power reserve indicator at 12 o’clock. It also featured a complication to the small date. The year 2005 then saw a triple complication model get added to the collection, in the form of the Reference 3712. It boasted a power reserve indicator, moon phase indicator and an analogue date indicator, with a beautiful sapphire crystal back case where you could view the calibre 240 PS automatic movement. This particular model had an extremely short shelf life (only a year), until Patek Philippe unveiled a new generation of Nautilus timepieces.

In celebration of the Nautilus’ 30th anniversary, Patek Philippe updated the collection with a rounder shape and modified case design – with a classic three-piece structure replacing the old combined base and mid-section paired with a top piece. The iconic ‘ears’ attaching the bezel to the midsection were also rounded off, while the bracelets were also refined and given a more modern look. The first of this new breed of Nautilus was the Reference 5711/1A, which boasted a 43mm case, a dial with central seconds and was powered by Patek’s calibre  324 SC. This model proved to be a real hit, with demand far exceeding supply.

The year 2006 also saw the release of the Reference 5712, which acted as the successor to the 3712. As well as the slightly larger case, this new iteration made several updates to the dial. These included the date numbers from 9 to 23 being upside down to improve legibility, a larger date and moon phase counter, and a more rounded 6 o’clock marker. On top of all this, another new timepiece was released in the same year – the Nautilus Chronograph, which was given the Reference 5980. It featured an all-new automatic chronograph movement housed in a 44mm case. The 30th anniversary collection was finally rounded off by the Reference 5800, which was a narrower version of the timepiece with a width of 38.4mm across the hinges.

Over the coming years, the Nautilus family expanded further with the introduction of many different variations for both men and women – both in steel and precious metals. Perhaps the most notable of these is the Reference 5726, which was presented at Baselworld 2010. It boasted an annual calendar complication, which was the first time this feature had ever appeared in a stainless steel Patek Philippe wristwatch. Four years later, the brand also released the Nautilus Travel Time Chronograph (Reference 5990/1A), which added a dual time complication to the column-wheel flyback chronograph.

The year 2016 saw the 40th anniversary of the Nautilus collection, and was marked by the release of two new References – the three-hand 5711/1P in platinum and the flyback chronograph 5796/1G in white gold. These limited edition models were characterised by a new blue tone for the dial, 12 applied batons in white gold, and diamonds used as hour markers. They even included an imprinted anniversary date on the dial. Despite the high prices, these models were highly sought-after and soon sold out.

In 2018, the very first Patek Philippe Nautilus featuring a perpetual calendar complication was released. Revered as the collection’s flagship model, this groundbreaking timepiece is made of white gold and contains an in-house calibre that is just 3.88 mm thick. This results in a watch that is only 8.42mm in height, making it an ideal dress watch. A year later, the brand unveiled the  Nautilus 5726/1A Annual Calendar with a blue dial – the colour of the original Nautilus model.

Many of the world’s most revered luxury timepieces have a really unique backstory, and Patek Philippe Nautilus watches are no exception. The history of these illustrious wristwatches is relatively similar to another groundbreaking design, the Audemars Piguet Royal Oak, which defined a whole new category of luxurious sports watches made out of stainless steel. It should come as no surprise, therefore, that both the Royal Oak and the Nautilus were designed by the same person – the legendary Gérald Genta.

According to the man himself, the Nautilus came about as a result of a chance encounter in a hotel restaurant. In a 2009 interview, Genta said: “Some people from Patek were sitting in one corner of the dining hall, while I was sitting alone in the other corner. I told the head-waiter: “Bring me a piece of paper and a pencil, I want to design something” and I designed the Nautilus while observing the people from Patek eating! It was a sketch that I completed in 5 minutes”. The watch later gained the name Nautilus after Captain Nemo’s submarine in Jules Verne’s Twenty Thousand Leagues Under the Sea.

A Break from Tradition

When Patek Philippe Nautilus watches were first released, they marked a real turning point for the brand. Producing a sporty watch made out of stainless steel was completely new to them, and caused a real scandal in its first few years. That soon changed, and the timepiece evolved into a truly iconic wristwatch that is in constant high demand. Indeed, these models are so sought-after that waiting lists are often several years long.

Another telling point that Patek Philippe knows it is on a winner with the Nautilus collection is the fact that the timepieces have barely changed, even after all these years. They still have octagonal bezels with rounded edges, coupled with a stainless steel bracelet made out of satin-brushed and polished links. If you are looking for a luxury timepiece that really broke the mould, Patek Philippe Nautilus watches are definitely for you.