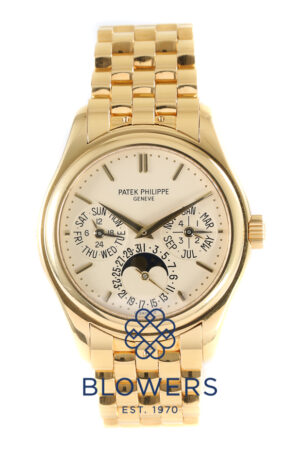 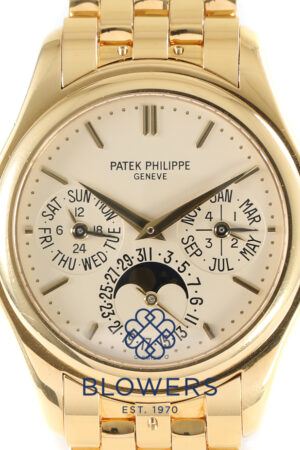 Patek Philippe released the world’s first wristwatch with a perpetual calendar in 1925, however the movement for this timepiece had existed since 1898 when the manufacturer made the movement to be housed in a ladies’ pendant watch. Unfortunately, this timepiece went unsold and the mechanism was rehoused a quarter of a century later into a yellow gold wristwatch with hunter back and a large fluted crown. This design was never repeated again, and was designated Reference number 97975. It was bought in 1927 by an American collector named Thomas Emery.

The year 1930 saw the release of the cushion-shaped perpetual calendar, which proved to be a revelation from both an aesthetic and technical perspective. The date display sits within the 6 o’clock sundial, with the day and month appearing at 9 and 3 o’clock respectively. This trendsetting timepiece set the precedent for the many cushion-shaped wristwatches that would become synonymous with Patek Philippe over the years, such as the Reference 5950 split-seconds chronograph and the perpetual chronograph Reference 5020.

Patek Philippe continued to experiment with some extremely interesting versions of the perpetual calendar. One such example is the Reference 1527, which comprises two perpetual calendar timepieces – one with a chronograph and one without. These were considerably larger than previous models. In 1944, the watchmaker released the Reference 1591, which was an audacious timepiece that boasted a perpetual calendar with a waterproof case, luminous hands and dial. Only two of these models were ever produced, and this innovative design proved to be the inspiration for the 2017 Reference 5320, which borrowed its dial and hands design. Some seven years later, the Genevan manufacturer released the Reference 2497, which were the first sweep seconds timepieces that Patek Philippe had made in series. During its 12 years of production, a total of 179 examples were crafted.

The year 1992 saw the introduction of the watchmaker’s first tonneau-shaped perpetual calendar, which is viewed by many as one of the most elegant complicated watches in existence. Designated Reference 5040, it was the first range to feature Breguet numerals and hands. A year later, a retrograde date indicator was added. Then in 1995, the brand introduced the Reference 5041, which proved to be one of the most interesting perpetual calendar timepieces around. A more robust model was then introduced in 1999, with the unveiling of the Reference 5059 that featured an officer’s caseback.

Origins of the Perpetual Calendar

The need for a perpetual calendar dates all the way back to 1582 when Pope Gregory XIII instigated the Gregorian Calendar as a way to correct faults in the previously-used Julian Calendar. The issue was that 365 days was actually shorter than the solar year, so the date of February 29th was added every four years to compensate. A perpetual calendar was therefore created to enable wristwatches to automatically adjust for months with 28 days, 30 days, 31 days and leap years. The first example of this was created in 1762 by Englishman Thomas Mudge. His creation went up for sale at auction in 2016 and was purchased by none other than Patek Philippe themselves.

The Patek Philippe brand and incredibly complex timepieces go hand in hand. There is no luxury watchmaker in the world that is more renowned for the intricacy of their complications than this Swiss family business. Some of the most intricate pocket and wrist watches in history have been developed by this manufacturer, giving them many records in the process.

Perpetual calendars are some of the most popular complications amongst watch enthusiasts and collectors, so it is no surprise that Patek Philippe offers an entire collection of perpetual calendars that represents some of the best timepieces the market has to offer. Ranging from 35mm to 39mm diameter, these exquisite timepieces can either be classic and elegant, or more sporty in design. Whichever option you choose, you are guaranteed to own an absolute masterpiece in terms of complexity and style.