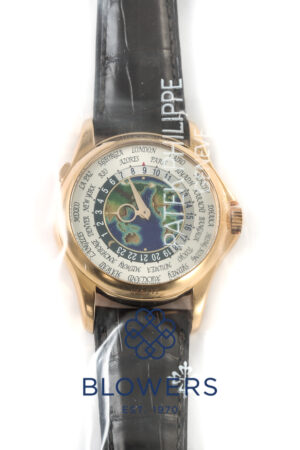 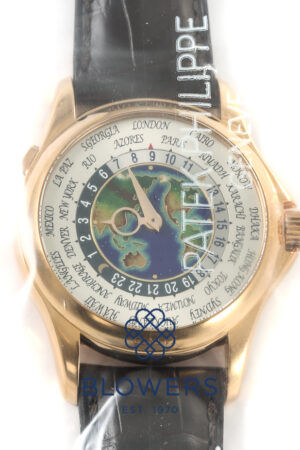 Patek Philippe was launched in 1851 when Antoine Norbert de Patek and Jean Adrien Philippe came together to pool their knowledge and expertise to form the Patek Philippe company. The fledgling Swiss manufacturer never looked back, producing time pieces for royalty and aristocrats, as well as playing their part in history.

The creation of the Patek Philippe World Time watch goes hand in hand with railway engineer Sir Sandford Fleming. His passion for efficiency and the smooth running of his trains led to the invention of 24 internationally recognised time zones back in 1884.

It took over 40 years, but eventually a watchmaker was able to create a complication that was able to display all 24 time zones, as well as allowing a user to switch between them at will. This person was Louis Cottier. Cottier’s creation inspired many in the industry, but he opted to collaborate exclusively with Patek Philippe to refine his idea further.

The first Patek Philippe World Time watch, the Reference 550 HU was released in 1937, before being followed up by a raft of new timepieces under the banner between 1953-1965.

This timepiece was the Reference. 5110, the first serially produced watch in the history of the model. It opted to shed some features of the previous incarnations, switching from manual movement to automatic, and utilising a pusher to set your local city, in lieu of the original’s second crown.

This new World Time was released with a variety of case materials, from pink gold to platinum and proved hugely popular until its production ceased in 2006, to be replaced by a new model, the 5130, a model still available today.

The Reference 5130 is an ideal model for travellers to this day. Its oversized hands derive from the designs of historic Patek Philippe World Time watches. It also boasts an updated size of 39.5mm, rather than the more traditional 37mm diameter. This was done in order to increase legibility and presence on the wrist

Available in yellow gold, white gold, pink gold, and platinum, the Reference 5130 was a huge hit and to this day is highly sought after by collectors and keen travellers alike.

After eight years of shaping and perfecting the intricate details of the World Time collection since its relaunch, the Reference 5131 released in 2008, stood out as Patek Philippe focused on getting the design and look of World Time watches just right.

The Reference 5131 was the first model since the World Time’s relaunch to have the iconic enamel decoration standing proudly on the watches central disk. It was released in a variety of materials, and each variant in the collection was assigned a specific region of the world to adorn the centre ring, standing out in its unique cloisonné style.

2014 marked the 175th anniversary of the famed Swiss watchmakers. To commemorate the occasion, Patek Philippe launched a series of celebratory pieces. This launch included two limited edition World Time models, the References 5575, and 7175.

This limited release celebrated the history and prestige of the brand, while honouring the timeless accuracy and craftsmanship that go along with it. The 7175 was a reinvention of some of the previous watches in the collection, such as the 5110, and 5130. It removed the crown guards found on older models and upgraded the caliber, as well as including a second complication.

The 21st century saw the rise of female watch collectors. This boom in popularity saw Patek Philippe opt to launch a women’s version of the 5575. This reference was a combination of stunning jewellery and luxurious watch and boasted a diamond bezel. This edition of the World Time was designed to stand out in any room, anywhere.

The limited edition run also saw a shift in the design of the centre ring for those on the continent of the watchmaker’s origin. Traditionally the design for Central European World Time’s had Paris at its heart, but to commemorate the anniversary, Patek Philippe chose to honour the region of its origin, Geneva.

The following years saw a raft of stunning watches in the World Time collection. This new generation of World Time’s boasted a more contemporary look, with new patterns and updated centre ring designs. And in 2019, the Patek Philippe Reference 5231 was unveiled, the first model of its kind to feature the covetable cloisonné enamel dial.

World at your Fingertips

When you own a Patek Philippe World Time, the world is available to you. Travellers wearing this model all know where they are. This is why the World Time is a highly sought after watch in the collection of globetrotting watch aficionados.

Unlike other, contemporary watches that can only display a handful of world time zones at one time, the World Time displays 24. This is possible thanks to the two rings that form the edge of the dial. The outer ring has 24 city names spread around, while the inner ring has a 24-hour scale, the two together is what allows Patek Philippe to bring the world onto your wrist.

The original Patek Philippe World Time watches released were game-changing not just for the Swiss watchmakers, but also for the world.

The first watches to ever hold 24 time zones at once, the original World Time references were innovative in their own right.

And since the relaunch of the World Time collection in the 21st Century has seen consistent new innovations to bring the model into a new age.

Additions of stunning centre ring designs, updated calibres, and more represent Patek Philippe opting to never trade in on its own name, and instead continue to strive to reinvent and innovate.