Before the likes of the GMT-Master, Submariner or Daytona, there came one of the Swiss manufacturer’s oldest collections, Rolex Air-King watches. These timepieces have remained a staple of the watchmaker’s catalogue throughout the decades, thanks to its unique backstory and historical relevance. 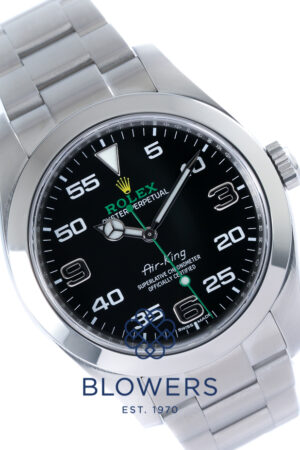 The History of Rolex Air-King Watches

Rolex Air-King watches came about in response to the revelation that British Air Force pilots were sporting Rolex timepieces instead of their standard-issue timekeepers while they fought in World War II. To commemorate this, the Swiss brand released a special “Air” series to honour the pilots after the conflict had ended. This included Air-Tiger, Air-Lion, Air-Giant, and Air-King.

The very first Air-King Reference 4925 was released in 1945 and included many of the standard features exhibited by Rolex bubblebacks of the era, such as even-numbered Arabic numerals and a cream dial. It also had a 34mm case, earning it the “King” moniker. This initial release was followed up by other models, such as the Reference 4499. All of these early releases contained manual-winding Hunter movements, which made them very similar to other stainless steel timepieces in the Oyster collection.

Rolex Air-King watches finally began to move away from this familiar aesthetic and develop a look of its own with the release of its transitional Reference 6652 in 1953. This model was the first to introduce the creamy silver dial and stick hour marks that would go on to become iconic. Four years later, Rolex would go on to release the timepiece that defined the line for the next 37 years, the Reference 5500. Featuring a 34mm Oystersteel case and matching bracelet, they were either fitted with the calibre 1520 or 1530 depending on the year of production. With its minimal time-only function and robust construction, the Air-King became THE entry-level Rolex watch that everyone wanted.

In 1989, the Reference 14000 was released, which finally provided a significant update to the 5500. It represented a brand new direction for Rolex Air-King watches in terms of design. It sported Arabic numerals at the 3, 6 and 9 hours with stick markers in between, while also introducing some much-needed hardware upgrades with its calibre 3000 movement and a sapphire crystal. This collection was eventually replaced in 2007 with the Reference 114200, with a couple more models being released until the Air-King was eventually discontinued in 2014.

The cancellation did not last long, however as Rolex Air-King watches were revived in 2016 with the Reference 116900. This model featured a 40mm Oystersteel case, a calibre 3131 movement and the same anti-magnetism features as the Milgauss Reference 116400.

In perhaps one of the most unusual partnerships in watchmaking history, Rolex Air-King watches began featuring the logo of Dominos Pizza on the dial. These models, as you would expect, were not available on the wider market – but were instead handed out to franchise owners for achieving sales goals. Even more interesting is the fact that the timepieces were manufactured in-house, with both logos and everything. This practice would continue for several years until Rolex stopped putting the Dominos logo on the dial and instead placed it on the bracelet.

The concept of a brand such as Rolex, which is often heralded as the epitome of luxury, pairing up with an American pizza company is something that would seem quite bizarre. Nevertheless, the Dominos Air-Kings do make for some interesting collectors’ pieces.

Rolex Air-King watches are a classic example of how the Swiss watchmaker consistently gets it right in the end – even if it takes them a few attempts. When the historic models began languishing in the dealer cabinets, the brand did not hesitate to cease production.

This gave the watchmaker some time out of the spotlight to perfect the collections. Then, just two years later, the new generation appeared. Perfectly blending vintage cues with contemporary trends, the modern-day Rolex Air-King watches are now standout models in the watchmaker’s illustrious catalogue.