The evolution of the legendary Explorer series, Rolex Explorer II watches are larger and more rugged than their predecessor. Through a series of upgrades, these legendary timepieces have gained cult status worldwide and are just another example of the Swiss manufacturer’s unyielding quest for innovation. 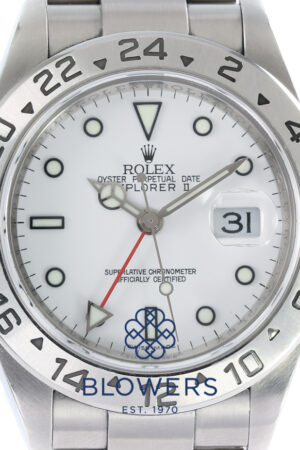 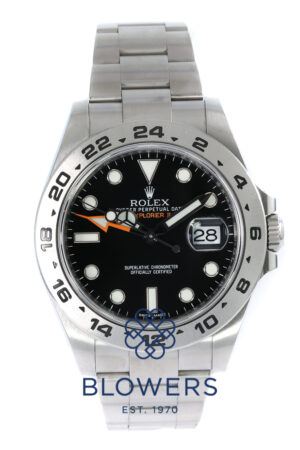 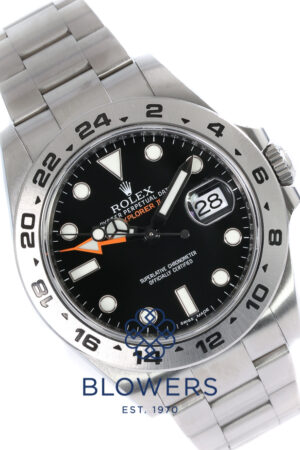 Rolex took the decision to release its very first sequential model of timepieces in 1971, the Rolex Explorer II. Never before had a watch been introduced to the world as the “second” version of an established collection, until now. The Explorer II changed all of that, paved the way for a host of other ‘sequels’, such as the GMT-Master II and Yacht Master II. The new Reference 1655 was a much larger and more complex version of the original Explorer. It sported a 39mm Oyster case and bracelet and a fixed 24-hour bezel, and came equipped with a date and 24-hour complication that used an orange (and later red) centre hour hand to indicate whether it was AM or PM. This large hand would earn the nickname “Il Freccione”, which means “arrow” in Italian.

The first upgrade to the Rolex Explorer II collection came in the form of the Reference 16550 in 1985, something which is largely considered to be a transitional model. Its case was increased slightly to 40mm, the bezel design was changed, the crystal became sapphire, and the large orange AM/PM hand was now of a thin, red style. Most notable for this series was the tendency for the white dial to patina, or degrade, over time – causing the dial to transition from a white colour to something more akin to ivory or cream.

Four years after the release of the reference 16550, the timepiece was discontinued and its place came the longest-running Explorer II reference ever – the 16570. The case, dial, bezel and bracelet remained largely the same, while the movement was upgraded to the calibre 3185. Over its 22 years of production, the Reference 16570 would undergo subtle changes, such as the luminous material on the dials and hands transitioning to LumiNova and later to Super-LumiNova.

The year 2011 saw the 40th anniversary of Rolex Explorer II watches, with the brand choosing to celebrate the occasion by unveiling a brand new member of the family – the Reference 216570. This latest model featured a 42mm case and a new ‘maxi’ dial with oversized indices and centre Mercedes hands. The centre GMT hand was back to orange and was similar in shape to the one seen on the Reference 1655.

Rolex Explorer II watches continue the Swiss manufacturer’s record of being associated with some of the world’s most high-profile people, such as world leaders and iconic stars of the stage and screen. In this case, however, things are not quite what they seem.

The Reference 1655 is commonly referred to as “the Steve McQueen”, named after the famous movie star. This is despite the popular figure never actually being seen wearing it, something which is in direct contrast to the iconic Paul Newman Daytona. Instead, the actor was frequently seen with a Rolex Submariner.

It is thought that the Steve McQueen moniker was first devised by auction houses as some sort of marketing scheme for the timepieces, which then caught on with the wider horology community. Wherever the association actually came from, this particular model of Explorer II still lovingly carries the Steve McQueen nickname to this day.

Boasting a precise GMT movement, robust steel case and iconic orange hand, Rolex Explorer II watches can be counted amongst the Swiss brand’s most recognisable collections. Just like its predecessor, this sporty model is part of a line of professional Chronometers that were specifically designed for expedition groups. Strongly associated with precision and a high-level of robustness, much like the adventurers and discoverers they represent, these watches enjoy a first-rate reputation among the horology community.

Paying a suitable tribute to the pioneering spirit, Rolex Explorer II watches are an extremely reliable counterpart to any situation or environment. It is certainly not something you need to be climbing the tallest mountain or exploring volcanic lands to enjoy, as its unrivalled design and functionality of the orange hand has seen it gain cult status across the world – making the watches a fantastic addition to anybody’s collection.