Capable of tracking several time zones simultaneously, Rolex GMT-Master watches are a classic example of the Swiss manufacturer creating something to solve a pressing problem. Whether they intended to or not, this iconic collection blossomed into a range of timepieces that is beloved across the world, and still very-much sought-after to this day. 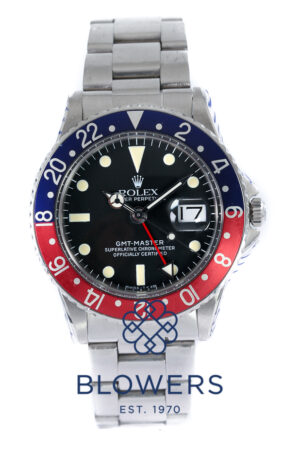 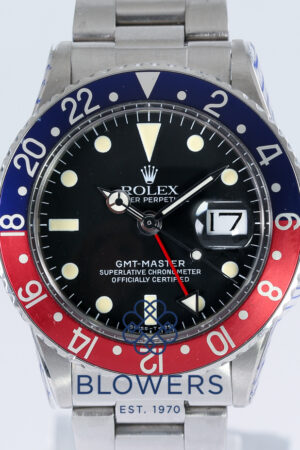 The History of Rolex GMT-Master Watches

The very first Rolex GMT-Master received the Reference 6542 and featured a 38mm stainless steel Oyster case, a bidirectional Bakelite bezel, four centre hands, a cyclops date and a riveted Oyster bracelet. The decision to use Bakelite, which is basically plastic, proved to be a costly one as the bezels would constantly crack. These were ultimately replaced with metal in 1956. The bezel itself had two colours red (day) and blue (night), as well as a 24 hour scale. This iconic red and blue mix led to the bezel being dubbed the ‘Pepsi’. It was to be used in conjunction with the red GMT hand to track the second time zone.

Aside from garnering the title of the official watch of Pan American Airways, Rolex GMT-Master watches can also boast around 15 minutes of fame on the silver screen. In the 1964 James Bond film ‘Goldfinger’, Bond Girl Pussy Galore was seen with one on her wrist, though this model was made of full yellow gold with a black face and black bezel. As a result, gold, and even steel, versions of this timepiece earned the moniker “Pussy Galore”.

The first Rolex GMT-Master watches proved to be extremely successful, so the manufacturer released an updated series in 1959 – the Reference 1675. The earliest version of this had a 40mm case, matte black gilt dials and a calibre 1565 – with the improved movement allowing for instant date/day changes at midnight. This lineup would undergo several modifications, including a change in the shape of its crown guards and a larger GMT hand. The movement was also upgraded to the calibre 1575 that featured hacking seconds.

A year after the Reference 1675 was discontinued, Rolex released the Reference 16750 in 1981. This new iteration was almost identical to its predecessor, apart from its upgraded movement that featured a quick-set date – marking a distinct shift away from just targeting the professional realm and expanding to attract the regular commuter. The new model also introduced the applied hour index, which had only previously been seen on gold GMTs. Before being replaced in 1988, the Reference 16750 series also witnessed the very first Root Beer version of the GMT-Master, renowned for its gold and brown bezel insert.

Although the name Pan American Airways might not be something that is familiar to the modern-day air traveller, the company used to be regarded as the face of luxurious intercontinental travel in the latter half of the 20th Century. As it continuously tried to push the boundaries of flight, Pan Am pilots found they were routinely coming against a persistent problem.

Because they were constantly criss-crossing between continents, the pilots needed a way to keep track of two time zones simultaneously on their watches. This is because air travel is based on GMT (now UTC) time. As a result, pilots would need to be able to see their local time and GMT time on their timepieces – something that up until the early 1950s was impossible. As the story goes, Pan American Airways is said to have reached out to Rolex to try and solve this issue, and the Swiss manufacturer immediately went to work. The result of this was the iconic Rolex GMT-Master.

Over half a century after the very first Rolex GMT-Master was released, the timepiece is still revered amongst watch aficionados and collectors alike. The classic aesthetic of the original 1955 model remains very much alive in the modern GMT-Master catalogue, despite the fact the design has been continuously evolving through the watch’s lifespan – including that of the GMT-Master II. Whether by design or sheer luck, Rolex appeared to have got it right from day one and created something that is truly timeless.

Regardless of this, everybody can agree that Rolex GMT-Master watches are the perfect choice for people who care a great deal about what adorns their wrist, and even those that do not. A classic and elegant style, coupled with a simple and useful complication makes these timepieces the ideal companion for everyday activities and for frequent travelling. This makes the GMT-Master a perfect addition to anybody’s collection.