In the world of film, it is quite common for sequels to fail to live up to the quality of its predecessor. While this can happen in the jewellery industry, this certainly isn’t the case with Rolex Yacht Master II watches. Much like the previous iteration, the Yacht Master II offers the perfect combination between strength and reliability, and elegance and aesthetics. 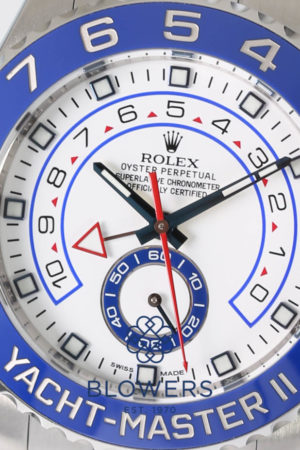 The story of the Rolex Yacht Master begins in 1992, when the very first iteration of Rolex’s homage to the sailing community was first released. Designed specifically for the nautical sportsman, the Yacht Master was a nod to the iconic Submariner but was essentially a completely different breed. Looking to capitalise on the success of the original Yacht Master, Rolex took 15 years to perfect every aspect of the collection and finally unveiled its long-awaited successor to the world in late 2007.

It was during Baselworld 2007 that the Yacht Master II was launched. While its predecessor shared close functionality with the Submariner, the sequel was totally different. Indeed, it is sometimes thought that the only overlap between the two Yacht Master watches is the name – given that the newer version looks like a whole new timepiece. From the outset, it is clear that the Yacht Master II has the needs of yachting professionals in mind at all times.

The first iteration of the Yacht Master II had a 44mm Oyster case, a blue Cerachrom (ceramic) Ring Command bezel and an Oyster bracelet. Two versions of these timepieces were created, with the Reference 116688 made out of yellow gold and the 116689 made out of white gold. The sequel also marked another huge innovation for Rolex, the in-house calibre 4161 that featured COSC-chronometer certification and a 72-hour power reserve. While this is standard for modern timepieces, at the time it was truly groundbreaking.

In later years, Rolex would go on to release a 904L steel version (Reference 116680) and a 18k everose gold (Reference 116681) to further bolster the collection. The stainless steel iteration in particular offers an interesting alternative for someone who prefers their watches to look strong and robust.

The sport of sailing requires endurance and concentration under extreme circumstances. That being said, athletes and sports professionals also attach a great deal of importance to elegance and aesthetics – thereby making Rolex Yacht Master II watches the ideal companion.

What makes a Rolex watch extra special is that every timepiece is created with the brand’s philosophy in mind. No matter which Yacht Master II model you choose, you can be confident that you are wearing a luxury item of exceptional quality.