Designed as a watersports-inspired timepiece for professionals, Tag Heuer Aquaracer watches provide everything a diver could ever need to cope with harsh underwater environments, while also offering a luxurious and sporty aesthetic. With striking visuals and a modern edge, the collection has become a huge favourite amongst men and women, and are some of the most sought-after wristwatches Tag Heuer has ever produced. 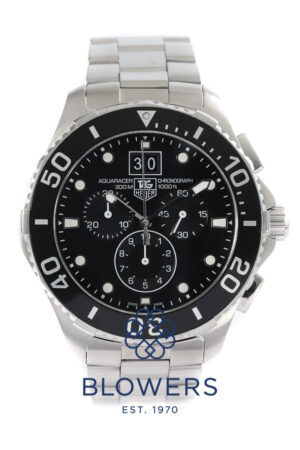 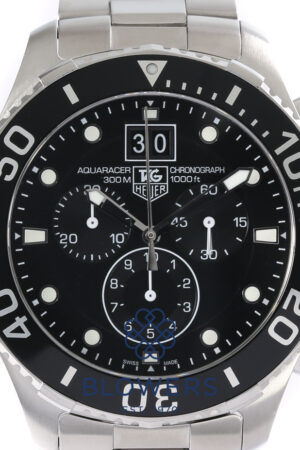 While Tag Heuer’s first foray into diving watches date back to as early as the 1980s, the Aquaracer itself was not launched until 2004. It was originally part of the 2000 collection of timepieces and was known as the 2000 Aquaracer. The timepiece’s main goal was to get the brand back into the “aluminium ring diving watch” market, something it managed to achieve with aplomb. Such was the popularity of the original model, that Tag Heuer decided to rename the entire 2000 range to the Aquaracer series.

Much like the Autavia, the Aquaracer can be categorised into a number of different generations, the first of these lasted until 2009. During these four years, multiple timepieces were launched in the collection, such as the Aquaracer Calibre 16 Chronograph, Aquaracer Quartz, Aquaracer Automatic, Aquaracer Grand Date, Aquaracer S Calibre, and Aquaracer Chronotimer. The first three in particular quickly rose to fame.

The second generation of Tag Heuer Aquaracer watches featured numerous major upgrades in terms of design and function. Lasting until 2012, this specific range gave a more serious-looking design to the 500 M series, and incorporated more features from the 300 M collection. Meanwhile, the third generation gave emphasis on redesigning the 2010 500 M model to become more conventional and less bold. This perfectly highlights the brand’s decision to create pieces that are more simple and suitable for everyday use.

Generation four began in 2014 and focuses mainly on the 300 M range of timepieces. While these newer watches have a familiar look about them, they have enhanced features especially around the dial area. Multiple variations were made in both ceramic and steel. There are also several special edition Tag Heuer Aquaracer watches, such as the Calibre 5 Limited Edition Leonardo DiCaprio, which was limited to just 1,600 pieces and created to support the efforts of the Green Cross International and the Natural Resources Defence Council. Meanwhile, the year 2020 also saw the release of the Tag Heuer Aquaracer x Bamford Watch Department piece. This model was designed to create a quality piece that had the perfect balance of toughness and conventionality.

Despite the continuous improvements, Tag Heuer Aquaracer watches have always managed to stay true to their roots, especially when it comes to functionality and performance. As one of the manufacturer’s most popular collections, they never fail to impress.

Specifically designed to meet the demanding requirements of watersports, Tag Heuer Aquaracer watches focus heavily on reliability and performance under pressure. Strong and robust, they were built to withstand everything that the sea and sports in general could throw at the wearer, and feature a plethora of features to ensure they will not crack under pressure. In addition, their unique technology, double security clasp, and unidirectional rotating bezel enables you to maintain accuracy and precision while underwater.

It is not just beneath the waves that the Aquaracer excels, however, as it is more than capable of performing on terra firma as well. Sweat and humidity resistant, the collection can comfortably survive even the harshest of conditions. All of this makes this the perfect wristwatch for people who prefer to never take off their timepieces, or have to worry about which environments they can be worn in. Available in a number of different styles, they are also ideal for those who appreciate style and functionality.

The Tag Heuer Aquaracer is a dynamic collection of high-performance, luxury timepieces that are passionate about the water. It combines solid water-resistance with the accuracy of a Swiss-made movement, all while looking incredibly stylish. Depending on the model, the Aquaracer can also be fitted with a stopwatch mechanism that allows for precision timekeeping during events such as regattas.

Alongside the Carerra and Monaco, the Aquaracer has quickly become one of Tag Heuer’s most popular collections. Boasting a chunky casing and an angular submarine hatch-inspired bezel, the timepiece knows how to make a statement. Available in a wide range of styles, there is definitely someone for everyone.