Stars of the silver screen, Tag Heuer Monaco watches are instantly recognisable and beloved by collectors and enthusiasts alike. A true classic, this legendary range of timepieces have truly taken the world by storm. Once hailed as a triumph of pioneering technology and design, the collection continues to delight and break the mould — all while retaining its vintage look and the iconic hallmarks of the brand itself. If you are a fan of bold aesthetics, this watch should be high on your list. 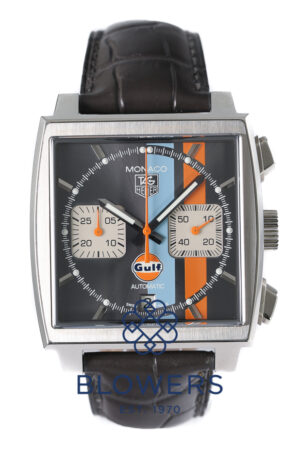 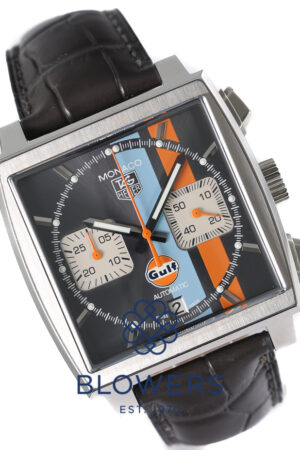 The Monaco name is derived from the legendary Monaco Grand Prix, an F1 race that takes place each year on the Circuit de Monaco. A huge motorsports fan, Jack Heuer sought to create a timepiece that would appeal to drivers and watch aficionados alike. Given the timepiece’s celebrity status, you can definitely say that he succeeded.

Unveiled at the 1969 Baselworld fair, the Monaco was a disruptive product in the watchmaking industry. Its very first models had the word “Chronomatic” written above the brand’s distinctive shield logo, and the “Monaco” name at 6 o’clock. This was later modified when Jack Heuer agreed to transfer ownership of the Chronomatic name to Breitling.

Just two year later, the Monaco would be catapulted onto the global stage when it appeared in the movie “LeMans” worn by Steve McQueen. It is said that the actor opted to wear the timepiece thanks to its unconventional design and unique look, with the wristwatch going on to be featured heavily throughout the film. This helped it become one of the most recognisable sports watches ever designed. In fact, one of the watches worn by McQueen during the film’s production fetched US$ 650,000 (before buyer’s premium) in 2012 — proving how popular it remained many years after the movie’s release. The other one fetched US$ 1,800,000 before premium in 2020, making it the most expensive Tag Heuer wristwatch ever sold at the time.

In 1971, an updated version of the model was released with a modified movement, designed to improve its efficiency. One year later, the manufacturer debuted a less-expensive self-winding chronograph movement which was housed in the Monaco 1533B and Monaco 1533G, as well as some Carrera and Autavia models. Also in 1972, the Monaco 73633 was introduced that was powered by a hand-wound movement. Two versions were available, a blue dial with white registers and a grey dial with grey or black registers.

The year 1974 saw the release of the Monaco 74033, which returned to the design layout of the very first timepiece, albeit with a slimmer design. A black version was also launched, nicknamed the “Dark Lord” by collectors. This particular model is extremely rare, given that it is said that only 100-200 units were made in total.

Unfortunately, the Monaco’s square casing and radical design meant it had limited success, leading the manufacturer to discontinue production. It was not until 1998 that the brand (now known as Tag Heuer following the acquisition of the Heuer name by the TAG Group in 1988) decided to launch the “Re-Edition” series, a collection of Monaco and Carrera pieces inspired by chronographs of the 1960s. The company even contacted the son of Steve McQueen to negotiate using his father’s image to promote the new-look Monaco.

The first reimagining of the Monaco was Reference CS2110, and sported a black dial with the old Heuer shield, a 30-minute chronograph counter, running seconds, and much more. It was released in a limited edition of 5,000 units and instantly achieved great success, so much so that new variations like the Reference CS2111 were quickly brought out to capitalise further.

In 2003, the Reference CW2113 was launched, which used the current Tag Heuer logo instead of the old version that featured on the CS2110 and CS2111. It was also the first Monaco to have a true square case that measured 38mm x 38mm. A year later, the Monaco V4 concept watch was introduced at the Baselworld festival. The world’s first watch with belt drives, linear mass and ball bearings replacing the more traditional wheels and pinions, this prototype created a huge buzz in the industry and was finally launched in 2009 as a limited-edition run of 150 pieces.

Also introduced in 2009 was the Monaco Calibre 12, which was easily recognisable thanks to its winding crown being positioned on the right and a dial with radial indices. It was available in three main colour combinations, blue with white counters, black with white counters and black with black counters. Fast forward to 2015 and the Monaco Calibre 11 was released, a faithful remake of the Reference 1133. The only differences were the movement itself, the shapes of the lugs and the shapes of the push-pieces.

To commemorate the Monaco’s 50th anniversary, Tag Heuer presented the Monaco Heuer 02, the first timepiece of the collection to feature the manufacturer’s in-house movement. Because of the watch’s unique design, its interior casing had to be re-engineered to house this mechanism. Together with the Monaco Heuer 02, another version of the Monaco with the old Calibre 12 movement was released in a limited-edition run of just 1,000.

Today, Tag Heuer Monaco watches are one of the main pillars of the brand. Thanks to its bold design choices and remarkable history, it will forever be regarded as one of the watchmaking world’s greatest achievements.

A Legend of the Silver Screen

Perhaps the most famous appearance of the Tag Heuer Monaco is on the wrist of legendary actor Steve McQueen in the motorsports movie “LeMans”. This immediately catapulted the wristwatch to iconic status, making it synonymous with self-assurance, rebellion and effortless cool. The story goes that Tag Heuer watches were shown to the film’s directors and stars, with McQueen personally deciding to sport the Monaco on his wrist. Not only was the timepiece clearly visible on screen, but also featured heavily on promotional billboards.

It is not just in “LeMans” where Tag Heuer Monaco watches feature heavily. Bill Paxton sported the watch on the 2004 film “Thunderbirds”, while the chronograph model was worn by Al Pacino in the mystery film “88 Minutes”. The Monaco can also be seen on the wrists of Will Smith, Brad Pitt and Matthew McConaughey, in addition to appearing in the TV series “Breaking Bad”.

Away from the big and small screens, Tag Heuer Monaco watches are loved by sports stars such as Maria Sharapova and Graham Rahal, and have even travelled to Vietnam on the wrist of Sammy Davis Junior when he visited troops stationed over there. A true global icon, the collection has truly cemented its place in watchmaking history.

Icon of the Luxury Watch Industry

Tag Heuer Monaco watches are no strangers to turning heads. Upon its launch, it became one of the world’s first automatic chronographs, and the very first water-resistant chronograph with a square casing. Ever since then, the collection has gone from strength to strength, amassing a huge and dedicated fanbase from across the globe.

Renowned for their boldness and precision, Tag Heuer Monaco watches are available in a multitude of colours and styles — meaning you are sure to find the ideal model for you whatever your taste may be.