La Chaux-de-Fonds, together with its neighbour, Le Locle, are located in the Swiss canton of Neuchâtel. The two cities are synonymous with watchmaking and appear on the UNESCO World Heritage List.

The architectural influence of Charles-Edouard Jeanneret-Gris, often referred to as “Le Corbusier”, is evident with the styling of the buildings. The streets of La Chaux-de-Fonds are arranged in grid-like patterns, with the windows of workshops arranged to exploit precious natural light, essential when working on timepieces. 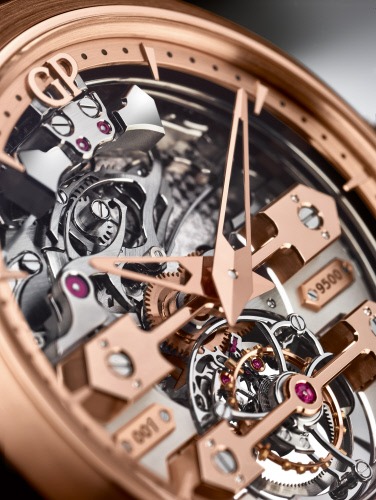 A prominent watch company based in the city is Girard-Perregaux. Its origins can be traced back to 1791 when Jean-François Butte began crafting high-end timepieces for the delectation of purists.

The name of the company harks back to 1852 when Constant Girard founded the company Girard & Campagnie. Later, he would marry Marie Perregaux, a member of an established family of watchmakers from Le Locle. In 1856, the respective surnames of the couple were combined to form Manufacture Girard-Perregaux, a name which lives on to this day.

Tourbillon with three gold bridges
Constant Girard had a profound interest in the tourbillon, a complication invented by Abraham-Louis Breguet in 1801. In approximately 1860, Girard created a pocket watch equipped with a tourbillon and three parallel bridges which received a first class award from the Observatory of the Canton of Neuchâtel.

Over the years, the styling of the bridges evolved. In 1883, arrow like tips featured on the three bridges for the first time. This design was later patented in the United States. The shape of the three golden bridges has remained relatively consistent since this period, becoming part of the Girard-Perregaux paradigm.

A famous pocket watch created by Constant Girard was “La Esmeralda”. Arguably the most celebrated timepiece he was responsible for, it bore his monogram and an enamel dial. The watch is said to have been given to the President of Mexico in the latter part of the 19th century. In the late 1970s, the maison produced a limited series of 20 pieces, replicating La Esmeralda. These timepieces continue to be much coveted by watch collectors.

Initially, tourbillon movements featuring three golden bridges appeared in pocket watches, but later they were used in the company’s wristwatches. In 2014, the Swiss brand adapted the three bridge design for a modern audience, releasing the Neo-Tourbillon with Three Bridges. In this instance, the bridges were made of titanium, sandblasted and treated with black PVD, evincing a contemporary air.

A history of prize-winning
In 1966, Girard-Perregaux released its first high frequency movement. The balance wheel oscillated to and fro at 36,000 vibrations per hour (5 Hz). The increased frequency of the movement conferred greater accuracy.

The watch company elected to send each watch equipped with this high frequency movement to the Neuchâtel Observatory, resulting in numerous certificates being issued for the serially produced watches. Prior to this, the only watches sent for chronometric testing were specially prepared models.

In recognition of the research and development undertaken by Girard-Perregaux, the Administrative Council of Neuchâtel chose to recognise its achievements by awarding the Observatory Centenary Prize in 1966.

It is this achievement in the year of 1966 which provided the inspiration for a collection of round timepieces sold by the brand. Interestingly, however, the majority of these watches are equipped with movements that have a frequency of 28,800 vibrations per hour (4Hz).

The 1966 collection of recent years has included chronographs, dual-time watches and full-calendar timepieces. Irrespective of the model selected, each watch exhibits a tasteful quotient of style.

In 2013, the Girard-Perregaux scooped further silverware with its ingenious Constant Escapement L.M. The watch won the GPHG, Grand Prix D’ Horlogerie de Geneva, “Aiguille d’Or”, the most coveted prize in the watchmaking field.

The Constant Escapement L.M. represents a significant development in the field of Haute Horlogerie. The watch is equipped with a constant force escapement using a state-of-the-art silicon blade to accurately portion pulses of energy to deliver greater precision.

The world time
Most notably, the brand has been closely associated with the ‘world time’ for many years. The complication, originally conceived by Louis Cottier in 1931, indicates the 24 time zones using a rotating disk around a central dial, with the names of major cities depicted around the periphery of dial or on a bezel.

Furthermore, the Girard-Perregaux WW.TC pairs a world time complication with a chronograph, providing a useful mix of functions.

Closing remarks
Girard-Perregaux offers a broad array of models, embracing various styles. The diverse collection includes men’s and ladies’ watches, presented in a selection of metals and incorporating various complications. Its fine timepieces are imbued with expert finishing and continue to perpetuate a rich watchmaking tradition that dates back to 1791.