Almost unashamedly simplistic, Rolex Oyster Perpetual watches can be seen as the purest form of everything founder Hans Wildorf wanted to achieve – namely create the definitive Swiss wristwatch that could be as indispensable and reliable as the pocket watch. Put simply, these watches are Rolex at its most pure – exceptionally-well made, decently priced and having a design that is effortlessly both timeless and contemporary. At around half the price of the Daytona and at least £1,000 less expensive than the Submariner or GMT-Master and GMT-Master II Collections, Rolex Oyster Perpetual watches are often seen as the ‘entry point’ to the world of Rolex. 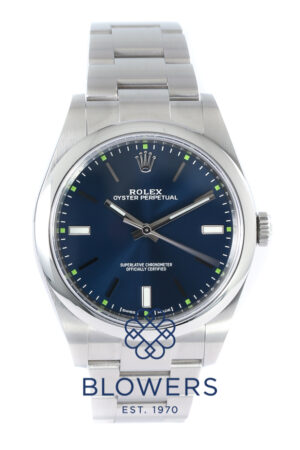 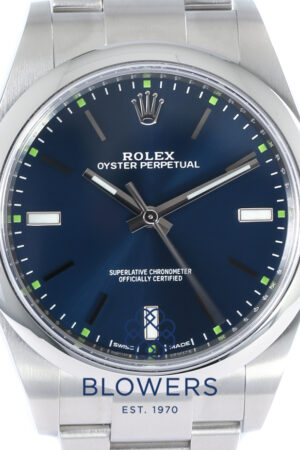 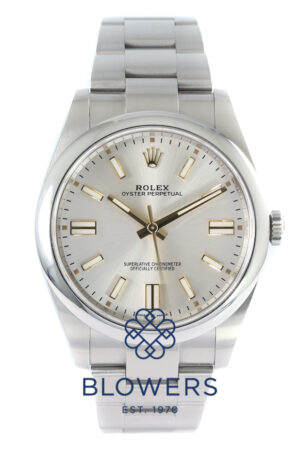 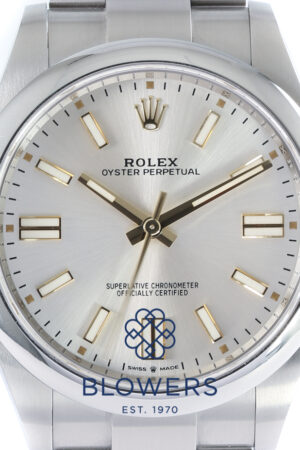 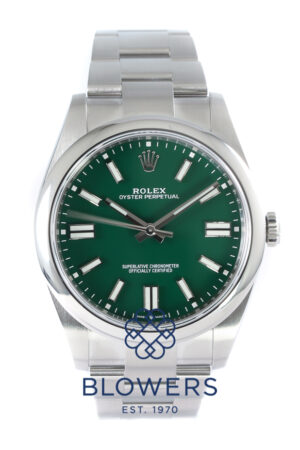 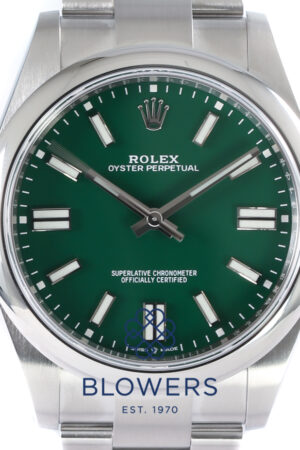 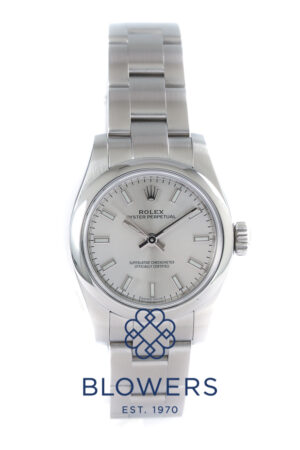 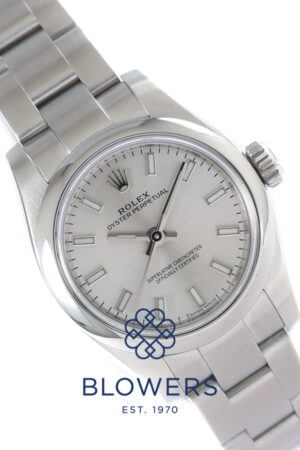 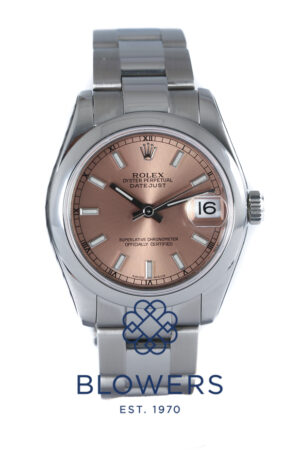 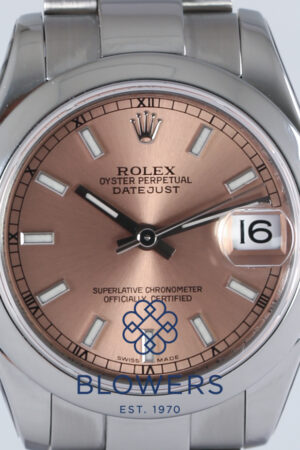 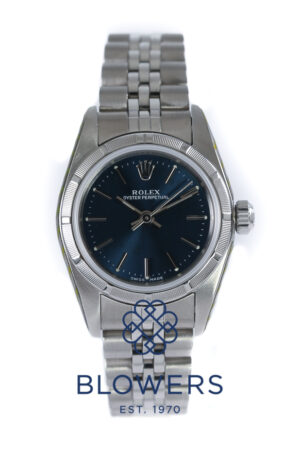 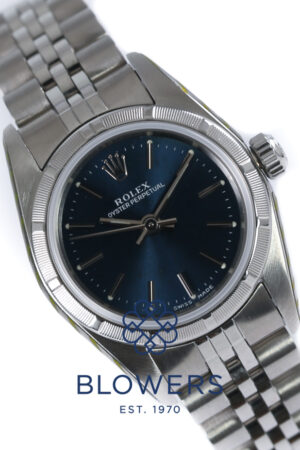 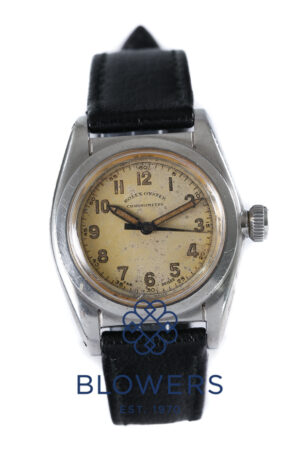 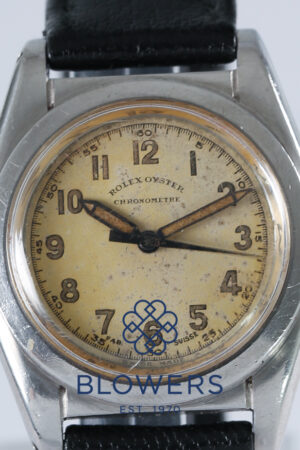 While the name Oyster Perpetual may seem to be an unnecessarily convoluted name for a collection of watches, these two words actually represent a description of its origins. The Oyster element refers to the world’s first water and dust resistant wristwatch, which Rolex launched in 1926. The second part is a nod to the self-winding movement that the Swiss watchmaker invented in 1931 – so-called as it was powered by the perpetual motion of the human wrist. As Rolex expanded, the name no longer referred to a singular collection, and instead became a prefix for other entries in the watchmaker’s illustrious range.

The Rolex Oyster Perpetual started life as Hans Wildorf’s attempt to convince the world that a wristwatch could really overtake the dominance of pocket watches. An important element of this was assuring the general public that his timepieces could be waterproof. This came about in 1926, when the watchmaker invented its patented case system – including a screw-down bezel, case back and winding crown that allowed the case to be hermetically sealed. To demonstrate this new invention, Rolex provided an example of the watch to English Channel swimmer Mercedes Gleitze on one of her swims. The timepiece emerged entirely unscathed, and so a legend was born.

Just being waterproof was not enough to satisfy Hans Wildorf’s ambition to make the wristwatch the most essential item of jewellery. If the wearer had to constantly unscrew the crown to wind up the watch’s mechanism, it could compromise the timepiece’s water resistance. To combat this, Rolex invented the world’s first self-winding mechanism with a free rotor – heralding a new era of functionality and convenience. Further innovations took place in 1945, with the Oyster Perpetual Datejust becoming the first-ever self-winding wristwatch with a date indicator. The Oyster Perpetual Day-Date then arrived in 1956, boasting an innovative Cyclops lens designed to magnify the date.

Rolex then pushed boundaries again in 1960, when an experimental Deep Sea special was attached to the outside of a bathyscaphe as it was piloted to a record depth of 10,916 metres in the Mariana Trench. This was then built upon in 1967, when the Oyster Perpetual Sea-Dweller was launched to meet the needs of professional deep sea divers – given the fact it was capable of reaching depths of up to 610 metres. Rolex Oyster Perpetual watches continued to evolve as time went on, with the Explorer II in 1971, the Sea Dweller 4000 in 1978 and the GMT-Master II in 1982. The collection was then boosted further in 1992 with the addition of the Pearlmaster and Yacht Master.

In the early 2000s, Rolex created their first movement that contained the patented Parachrom hairspring, which was ten-times more shock resistant than traditional hairsprings. It made its first appearance in the Cosmograph Daytona and has been gradually added to every men’s collection. The same level of precision was then added to the women’s collections in 2014, thanks to the development of the Syloxi. More innovations followed with the Cerachrom two-tone bezel that first appeared on the GMT-Master II in 2005., the paramagnetic escape wheel on the 2007 Milgauss, the programmable countdown function on the 2007 Yacht-Master II and the patented Glidelock clasp on the 2008 Rolex Deepsea.

More new models followed in 2012, with the release of the annual calendar Saros and Oyster Perpetual Sky-Dweller. Then, at Baselworld 2016, Rolex impressed the watch world once again with the unveiling of new versions of the DateJust, Pearlmaster and Explorer – alongside the new Air King and Cosmograph Daytona.

One of the most telling aspects of how good a watch’s build is, is how often it changes during the lifespan of the timepiece. In the case of Rolex Oyster Perpetual watches, not much has changed at all.

The original design had three parts: the central case (which includes the lug and a separate case-back and bezel), and a metal ring (with external screwed threads that hold the movement, dial and hands). This ring has a pin at 9 o’clock and a hole at 3 o’clock, so that when the ring is inserted into the case body, the pin fits into a matching hole in the case – while the crown and winding system fit into the hole. Most Oyster cases will also have a middle case filled from a solid block made out of 18ct gold, platinum or steel. The middle case contained a friction-fitted sapphire crystal and bezel, plus a screwed-down fluted case back.

Rolex also developed its own patented winding crowns to ensure the timepieces maintain optimum water resistance – known as the Twinlock and Triplock. The Twinlock, used for the Oyster Perpetual, is water resistant to 100 metres and uses two rubber gaskets that prevent water and dust from getting into the movement – even when the crown is not screwed on properly. The Triplock works in a similar fashion, but with a larger case tube and four rubber gaskets.

The strap has also barely changed throughout the lifespan of the watch, aside from switching to a bracelet from a leather strap. Rolex first introduced the new strap in the 1930s and it remains an integral part of the collection to this very day. The only update to this was the development of a more robust and patented clasp.

A History of Achievement

Much like other well-known collections, Rolex Oyster Perpetual watches have been adorned on the wrists of the world’s most influential people, while also being subjected to extremely harsh conditions. The timepiece was worn by Sir Malcolm Campbell as he was breaking land speed records in the Bluebird in 1935, while Chuck Yeager, the first person to break the sound barrier, also wore one.

These amazing feats continued in 1953, when Sir Edmund Hillary wore an Oyster Perpetual as he became one of the first people to reach the summit of Everest. This amazing achievement sparked the release of the Professional series, the first of which was based on the timepiece worn by Hillary and was fittingly called the Oyster Perpetual Explorer. This was followed by the Oyster Perpetual Submariner that was created for divers and capable of being resistant to depths of 200 metres, while the Oyster Perpetual GMT-Master was developed for airline pilots and was capable of telling the times in different timezones. Finally, the Oyster Perpetual Milgauss was unveiled in 1956 to help the scientists at CERN to resist magnetic fields.