Should I Buy an IWC Watch?

A perfect blend of Swiss craftsmanship and cutting-edge American engineering, International Watch Co (IWC Schaffhausen or simply IWC) has long been a pioneer of the luxury watch industry. From being the first manufacturer to create a digital timepiece to beating the competition to craft titanium bracelets, the company has been able to push the boundaries of innovation time and again.

The brand is synonymous with precision and quality and quickly became one of the most prolific watchmaking companies in the world and were able to take on highly-profitable commercial and military contracts very early on in its lifespan. If you are currently asking yourself “should I buy an IWC watch”, we have all the information you could possibly need.

What is Special About IWC?

If you’re a real fan of innovation, then you can’t get much better than IWC. Instead of relying on fancy celebrity endorsements and ballooning marketing budgets, the company has instead focused its financial might on creating timepieces that defy traditional technical expectations.

For example, the Grand Complication wristwatch was, as you’d probably expect from the name, the most complicated timepiece of its kind — containing 659 parts. Meanwhile, the Aquatimer was the first to be water resistant to 2,000 meters and the Da Vinci can be accurate for 500 years. Therefore, if you like your watch manufacturers to always be ahead of the game, you can’t do much better than IWC.

Buying an IWC watch is also a great idea if you’re really interested in design. Although the timepieces may not be as over-the-top or ostentatious as some competitors, they do provide an ideal balance of functionality and aesthetic detail. The company was for over 20 years working with an engineer called Ferdinand Porsche, whose other design work aside from watches included the Volkswagen Beetle. He also founded a rather famous car manufacturer that bears his name — so you know you are dealing with a company that has an eye for design.

Do IWC Watches Keep Their Value?

Yes, IWC watches have a fantastic track record of holding their value, with some models actually appreciating in value as time goes on. This is primarily because the brand is highly regarded by experts the world over, thanks to its unrivalled technological prowess. 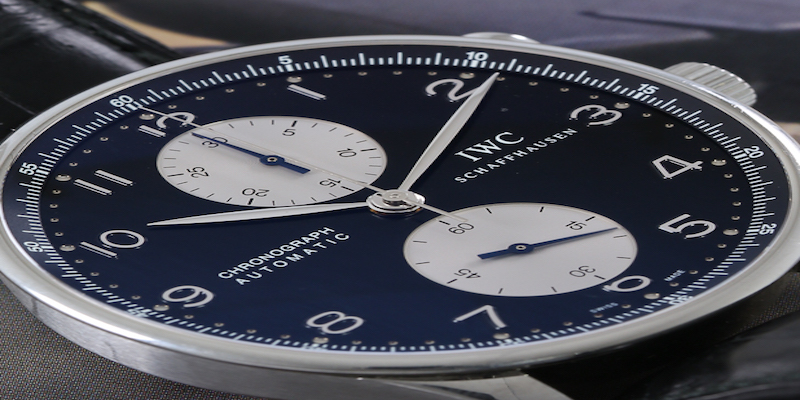 While IWC timepieces may not have the same resale potential as a Rolex, for example, the fact that you would be spending significantly less to purchase the watch in the first place makes them very attractive options for those looking for an investment opportunity. This is, of course, provided that they are properly maintained and cared for.

Are IWC Watches a Good Investment?

Absolutely. As well as looking good, IWC watches can provide a fantastic opportunity for investment. The timepieces have a history of creeping up in value over the years, making them a great alternative to more well-known brands. Vintage models are especially popular.

One advantage that IWC has over its more famous rivals is the fact that its watches are produced in much more limited quantities. This means that while both brands may experience a similar level of growth, IWC timepieces will be a lot more rare — adding another level of collectability and potentially pushing up their value even higher in years to come.

What is the Best IWC Watch to Buy?

With such a large array of options available, you are certain to find an IWC watch that fits your taste and style perfectly. Top collections include the Portofino, Ingenieur, Da Vinci, and Aquatimer. Ultimately, the best IWC to buy depends entirely on what you want to get out of your purchase.

We’ll provide a brief history of the most popular ranges of IWC watches and detail why you should consider adding them to your collection.

The IWC Portofino collection takes its name from the quaint fishing village on the Italian Riviera, synonymous with glamour. The collection started out in 1984, when IWC adapted an existing pocket watch, turning its movement through an angle of 90° and housing it within a wristwatch case.

IWC addressed this layout with the subsequent release of the Portofino Hand-Wound Reference. 5448 in 2008, part of the brand’s ‘Vintage Collection’. This model, unveiled in the same year the Swiss watch company celebrated its 140th anniversary, featured a moon-phase below noon and a small seconds display above 6 o’clock.

Then in 2011, IWC revisited its Portofino collection, updating some existing lines and releasing two new models, the Portofino Dual Time and the Portofino Hand-Wound Eight Days. This latter model represented an interesting chapter in the history of IWC as it contained the 59210 calibre.

As you might expect from a collection named after the glitz and glamour of the Italian Riviera, Portofino watches are famous for their timeless, classical aesthetics that really inspire a lasting allure. This makes the Portofino collection a must for anyone that has an eye for design.

Launched in 1955, the IWC Ingenieur Reference 666 incorporated an automatic movement. This inaugural version of the model featured the Pellaton winding system, invented by IWC’s Technical Director at the time, Albert Pellaton. The bidirectional self-winding system efficiently transmitted energy from the motion of the wearer’s wrist to the main spring. The watch was intended for use by professionals exposed to magnetic fields when undertaking their work, hence the choice of nomen ‘Ingenieur’, meaning ‘Engineer’. 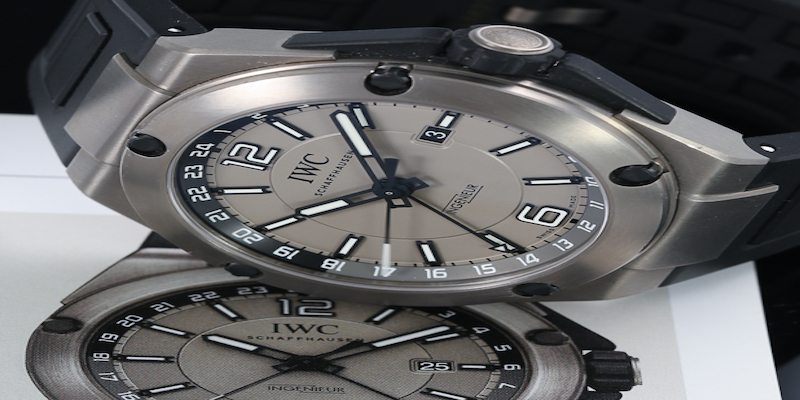 In 1976, renowned designer Gérald Genta updated the design of the Ingenieur and the iconic Ingenieur SL (Reference 1832) was released. This timepiece was very different from the traditional aesthetic of former models, adopting a notable degree of sportiness with its styling. In particular, Genta equipped the bezel with five bore holes, each containing a retaining screw. Similar to his Audemars Piguet Royal Oak and Royal Oak Offshore design, Genta made the bezel mounted screws a design feature, albeit in the case of the IWC they were functional and not merely decorative.

The collection underwent a major overhaul in 2013, coinciding with the brand’s new partnership with the Mercedes AMG Petronas Formula One Team. This new range of models was extensive, sometimes drawing on the past. The Ingenieur Automatic (Reference 3239) repeated its historical point of differentiation, proving tolerant to magnetic fields. However, IWC also embraced modernity using lightweight materials typical of motorsports such as carbon fibre, ceramic and titanium.

This perfect blend of style and precision makes the IWC Ingenieur collection a must for somebody who wants their timepieces to be functional yet stylish.

This range of watches was first released in 1967 at a time when scuba diving was becoming increasingly popular. This model, known as Reference 812AD, included an inner rotating bezel and was water resistant to 200 metres.

The watchmaker then collaborated with Porsche Design and released the Ocean 2000 (Reference 3500) in 1982, which depicted both companies’ brand names on the dial. The timepiece was unusual as it was the first serially produced divers’ watch with a titanium case. Moreover, the watch was water resistant to 2000 metres, hence the name of the timepiece.

The GST sports watch collection was released in 1997. This range of timepieces included complicated models such as the GST Chrono Rattrapante (Reference 3715) and the GST Perpetual Calendar (Reference 3756). The collection of models also included the GST Aquatimer Automatic (Reference 3536), featuring a titanium case and water resistance to 2000 metres. Then in 1999, IWC showed its ingenuity once again by releasing the GST Deep One (Reference 3527). This watch was equipped with a mechanical depth gauge, housed within a titanium case; it stylishly blended black, white and yellow dial detail to handsome effect.

IWC revisited the Aquatimer collection in 2004 and subsequently in 2009. The changes made in 2009 were particularly significant. The case dimensions grew, meeting the increased demand for larger watches, and the external rotating bezel featured for the first time. The Aquatimer Chronograph (Reference 3769) was the first IWC divers’ watch presented in a noble metal, 18-carat red gold. All versions of the Aquatimer collection released in 2009 incorporated a user-friendly ‘quick-change system’ for the bracelet. The Aquatimer Deep Two (Reference 3547), also released in 2009, was the spiritual successor of the GST Deep One. The watch incorporated a refined version of the mechanical depth gauge and was offered with a choice of stainless steel bracelet or rubber strap. The stainless steel case measured a sizable 46mm in diameter.

A culture of continuous improvement is clearly part of the IWC paradigm, because, in 2014, the Swiss watch company revisited the Aquatimer collection once again. On this occasion, the biggest single change was to the bezel. The new IWC SafeDive system allows the wearer to turn the external bezel anti-clockwise causing the internal bezel to rotate. However, should the wearer turn the external bezel clockwise, an ingenious clutch system inside the case disengages, ignoring the input and preventing the wearer inadvertently lengthening the dive time indicated.

If you’re a lover of the water and especially diving, the IWC Aquatimer is the ideal choice. It is functional and fashionable and you can even change styles with ease thanks to its quick change bracelet. No matter what you want from your watch, you’re sure to find it with the IWC Aquatimer.

The IWC Da Vinci, named after the celebrated artist and scientist, Leonardo da Vinci, was first released in the late 1960s. Intended to be an avant-garde timepiece from the outset, in 1969, IWC equipped a version of the watch with a quartz movement, something of a revelation at the time. 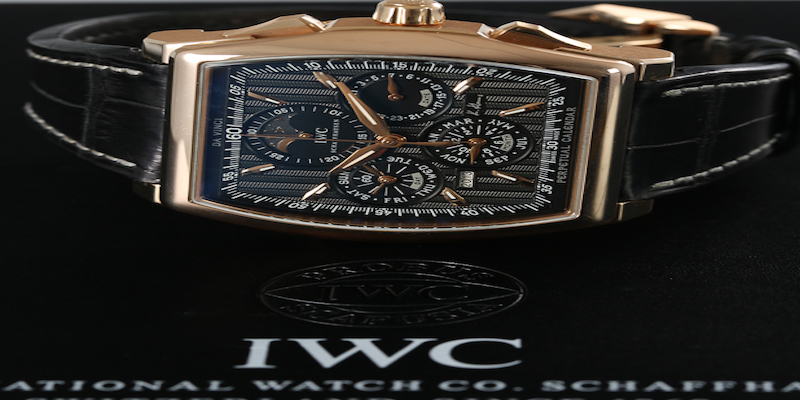 However, at the heart of its culture, IWC has always been synonymous with mechanical wristwatches and, therefore, in 1985, the company released a mechanical chronograph equipped with a perpetual calendar, intended to appeal to purists. This watch, the brainchild of the company’s highly respected watchmaker, Kurt Klaus, featured an unusual four-digit year indication. The following year, in 1986, IWC once again embraced modernity, releasing a ceramic version of its perpetual calendar.

Perhaps the greatest landmark in the history of the IWC Da Vinci came in 2007. Firstly, all models adopted a tonneau shaped case. Secondly, the Schaffhausen-based watch brand released an unusual chronograph. Most chronographs are equipped with two registers showing the elapsed hours and minutes separately, necessitating the wearer to aggregate both readouts to calculate the elapsed interval. The Da Vinci Chronograph, fitted with the in-house 89360 Calibre, combined the elapsed hours and minutes in one readout, positioned below noon, proving particularly simple to interpret.

In 2009, IWC released its technical tour de force, the Da Vinci Perpetual Calendar Digital Date-Month. The display presented the date and month via apertures spanning the east-west axis of the dial. A leap indication featured within an aperture at 6 o’clock, nestled within the small second’s display. Whilst below noon, the chronograph hour and minute registers were combined, similar to the aforementioned Da Vinci Chronograph.

As you would probably expect from a collection named after such a renowned innovator, the Da Vinci timepieces are ideal if you’re somebody who appreciates a watch that pushes the boundaries of conventionalism.

If you’re still unsure about which IWC watch to buy, the experts at Blowers Jewellers are here to help. We’ll take the time to understand what you want from your timepiece and recommend the right watch to suit your requirements. Contact us today and we’ll go through your options.

Newer Blowers Jewellers Nominated for Best Pre-Owned Watch Retailer of the Year
Back to list
Older Are Panerai Watches Worth the Money?
close