Tag Heuer can trace its origins to 1860 when a 20-year-old called Edouard Heuer opened a small workshop in Saint Imier, Switzerland. In 1887, Edouard invented the oscillating pinion, an invention which continues to be used in many chronographs to this day. Interestingly, the year “1887” would be subsequently used by TAG Heuer for the name of a manufacture movement released in 2010. 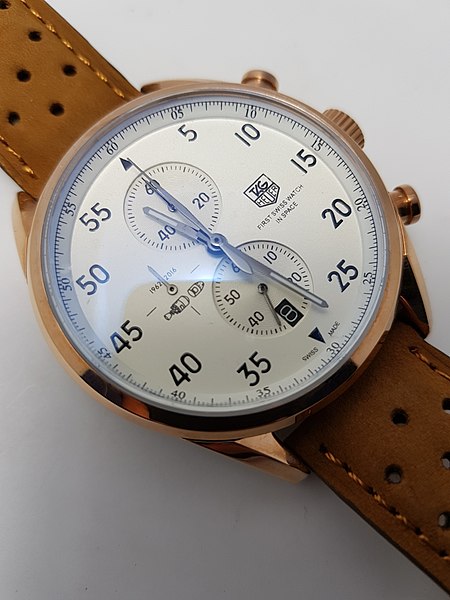 Throughout its history, Heuer, and later named TAG Heuer, has been linked with chronographs and timers. For example in 1911, Heuer invented the Time of Trip, an on-board chronograph for installation within the instrument panels of cars and aircraft. The device was used to indicate the duration of a journey.

Heuer created the Solunar in 1949 after a request from Abercrombie & Fitch for a watch capable of indicating the tides. Jack Heuer, who was only 15 years of age at the time, spoke to his physics teacher, Dr. Heinz Schlit, who performed all of the necessary calculations to bring the watch to fruition.

In 1963, Jack Heuer designed the Carrera chronograph, named after the hazardous Carrera Panamericana car race of the 1950s. The watch was the first timepiece designed by Jack and featured a remarkably clean and highly legible display.

A significant landmark in the history of Heuer was the decision to make the first self-winding chronograph. Jack Heuer was very aware that the research and development costs of creating this movement would be colossal. He approached Willy Breitling and they agreed to share the development expenses between both watch companies. Project 99 was the codename for the movement, later to be named Calibre 11 at the time of its launch in 1969.

To differentiate the first Heuer watches equipped with the Calibre 11 from Breitling models featuring the same movement, Jack had the inspired idea to release the iconic Monaco model. The Monaco paired the world’s first automatic chronograph with a water-resistant square case. This watch had a stylish appearance and would famously appear the following year on the wrist of Steve McQueen in the film, “Le Mans”.

Motorsport has always been close to the heart of Heuer. The company enjoyed a commercial relationship with Team Ferrari during the 1970s, both as a sponsor and as the official timekeeper.

Heuer was also at the vanguard of quartz equipped timing devices, releasing the Microsplit 820 in 1973. This was the world’s first quartz pocket sized sports timer, accurate to 1/100th of a second.

In 1985, Heuer was purchased by TAG Group and the brand name changed to TAG Heuer. Later, TAG Heuer was acquired by Louis Vuitton Moët Hennessy (LVMH), but the name of the watch brand,  on this occasion, remained unchanged.

The brand has also created models eschewing conventional hairsprings in favour of magnetic pendulums. It is this degree of innovation which justifies the company’s claim to being “avant-garde”.

TAG Heuer has an extensive range of models including the Formula One, Aquaracer, Link and Silverstone. However, the darlings of the brand’s collection are the Carrera and the Monaco. These two families have led to many gorgeous looking variants being released over the years and there are many good examples to be found on the pre-owned market.

Both the Carrera and Monaco have incorporated various movements, including the legendary Zenith El-Primero. This iconic high-frequency 5 Hz movement is called the Calibre 36 by TAG Heuer and is held in high-esteem by purists for its fully integrated design incorporating a column-wheel, proffering a velvety action to its push pieces.