In 1926, “The Tudor” was registered as a trademark by a watch dealer called ‘Veuve de Philippe Hüther’. Hans Wilsdorf, the founder of Rolex, took over “The Tudor” brand in 1936 with a desire to offer his retailers an alternative, more affordable range of watches to be sold alongside his legendary Rolex timepieces. 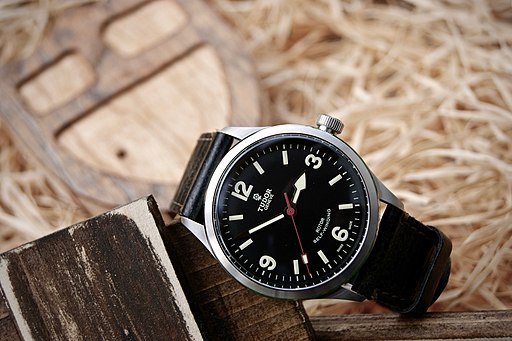 Establishing “Montres TUDOR S.A” in 1946, Wilsdorf offered a new collection of watches appealing to a different market segment, but with the reassurance of the Rolex name. The addition of another brand accorded economies of scale. Rolex cases were paired with third-party movements and watches were assembled using the same facilities as those used for its older sibling.

The Tudor Oyster was launched in 1947. Interestingly, the ‘Oyster’ name was first seen on Rolex models, alluding to the water resistance of the watches. The practice of sharing brand names between the two marques would also see Tudor ‘Submariner’ models released in due course.

Tudor used highly original advertising to promote its products with Wilsdorf’s face appearing prominently on promotional material accompanied by his own personal endorsement for the company’s watches. Campaigns extolled the robust qualities of the Tudor Oyster Prince, launched in 1952. These early models offered water-resistant cases and self-winding movements.

The Tudor Oyster Prince 7909, released in 1952, was offered in various cases sizes, ranging from 31mm to 34mm in diameter. The crown featured the Rolex logo and the case housed the calibre 390, a third-party movement with a frequency of 2.5Hz. After the release of this first version of the Oyster, additional models followed, including the Tudor Prince Date-Day, revealed in 1969, with a case measuring 37.5mm in diameter which was considered large at the time.

Diver watches also became a speciality for Tudor with the release of its first Submariner model in 1954, the Tudor Oyster Prince Submariner 7922. The Mercedes-style hour hand featured on the model and the caseband was devoid of crown protectors. In 1959, with the advent of the 7928, crown guards appeared and over subsequent years the shape of these evolved. With the passage of time, the Tudor Oyster Prince Submariner was enhanced with further modifications.

There was a period when Tudor seemed to have lost its way and demand for its models waned. It ceased selling its watches in the UK and America for a number of years and only returned to the UK market in 2014.

The arrival of Davide Cerrato, design director at Tudor, spelt a new era of creativity and the brand began releasing stunning watches which captured some of the interesting details of its former timepieces.

The Tudor Advisor, equipped with a mechanical alarm and released in 2011, took inspiration from the Tudor Advisor 7926. The modern watch was not a replica, which could undermine the kudos of vintage pieces, but a contemporary interpretation of a horological gem from the past.

The Tudor Pelagos celebrated the brand’s prowess in yesteryear at making divers’ watches and included a case with no crown protectors, a snowflake hour hand and a case made of titanium and steel.

Arguably, the brand’s greatest design arrived in 2012 with the release of the Tudor Heritage Black Bay. Sharing some styling elements of the Submariner models of the 1950s, this watch includes a burgundy coloured bezel and snowflake hour hand. It is offered on a choice of steel bracelet, aged leather or black fabric strap. The watch won the GPHG (Grand Prix d’Horlogerie de Genève) Revival prize in 2013 and has become a huge commercial success for Tudor.

The Tudor Heritage Chrono Blue, launched in 2013, employs some of the eye-catching blue and orange hues of the Montecarlo models of the 1970s. Tudor has continued to enlarge its range of models with the subsequent release of the Ranger and Style models.

A few years ago, the brand sat in the shadows of its older sibling, Rolex. While Tudor models remain more affordable than the watches which carry the iconic crown logo, they have a character all of their own and offer much for the sartorially conscious watch buyer.

The interest in the brand has also seen a renewed interest in Tudor vintage models with prices rising for rare examples with attractive patination.

One thought on “Tudor Watches History”